Short Take: Lord of the Flies 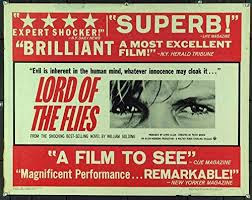 (1963) Written and directed by Peter Brook; Based on the novel by William Golding; James Aubrey, Tom Chapin, Hugh Edwards, Roger Elwin and Tom Gaman; Available on Blu-ray and DVD

“All I wanted was a small sum of money, no script; just kids, a camera, and a beach.”
– Peter Brook (excerpt from Peter Brook’s autobiography, The Shifting Point)

“Grown-ups know things. They ain’t afraid of the dark. They’d meet and have tea, and discuss, and things would be all right.” – Piggy (Hugh Edwards) 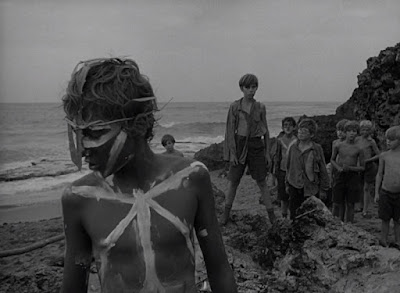 I’m honored to have been invited to participate in the first ever blogathon hosted by Paul Batters of Silver Screen Classics, the 2020 Classic Literature on Film Blogathon. May this be the first of many blogathons to come. 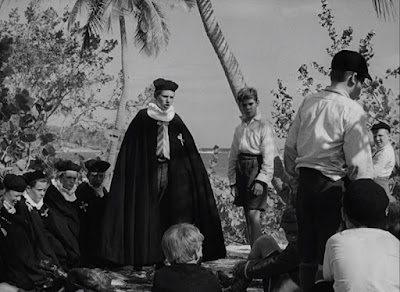 Director Peter Brook’s (mostly known for his work in the theater) mostly faithful adaptation of William Golding’s enduring novel captures the source material’s key events, illustrating what happens when a group of boys stranded on an island are left to their own devices. Set on a remote South Pacific isle, Lord of the Flies was filmed on location in Puerto Rico and off the coast on the island of Vieques. Adding to the realism of the production, Brook cast boys without previous acting experience, which proves to be a boon and detriment. 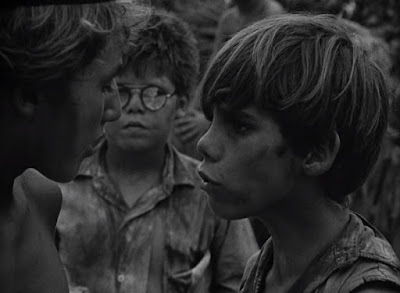 The opening title sequence, told in a montage of photos, establishes the boys’ sheltered lifestyle back home in England. After their chartered flight crashes, with no surviving adults, it becomes clear that the boys must fend for themselves if they hope to survive. Attempting to maintain some semblance of order, the children elect a leader, Ralph (James Aubrey). Almost immediately, he’s at odds with Jack (Tom Chapin), a choir boy who leads a pack of hunters. While Ralph endeavors to preserve the status quo as the de facto chief (“The rules are the only thing we’ve got.”), he finds his control giving way to Jack, who rules with fear and intimidation. 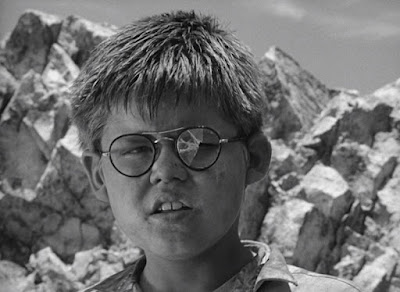 While the actors playing Ralph and Jack do an admirable job, Hugh Edwards first and only film role as Piggy is a trifle underwhelming. As established in Golding’s book, Piggy is the moral and intellectual center, representing Ralph’s conscience and a thorn in belligerent Jack’s side. A conch shell, which Piggy discovers on the beach, becomes an important symbol of law and order amidst chaos. When Jack and his followers fail to respect what the conch represents, it’s another sign of a shift in power. Unfortunately, Edwards reads his lines rather than acts them, and his wooden performance diminishes the impact of his scenes. 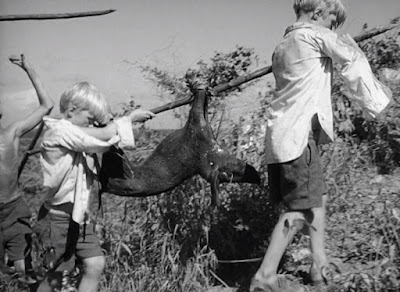 In the translation from book to screen, one casualty is the significance of the title, made clear in the novel but more oblique in the film. A festering pig’s head on a pike, covered in flies, remains a powerful image, however. The Beast, which figures prominently in the book and movie, is a manifestation of the children’s fears and uncertainty about the unknown. It’s something they can ignore or conquer (with disastrous results). One of the smaller boys, Simon, observes, in a moment of lucidity before his descent into madness, “Maybe it’s only us.” We’re reminded the most formidable opponent is ourselves. 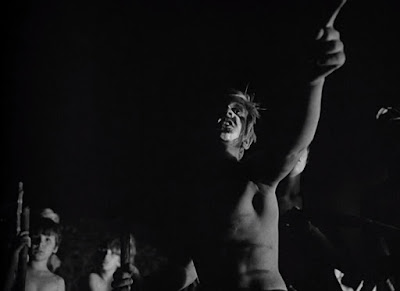 Lord of the Flies is a story that, given our planet’s current events, couldn’t have been timelier. Although the dramatis personae are children, it’s a cynical, yet sadly accurate microcosm of society. Left to our own devices, many of us might likely resort back to a more primal state, where violence and rash behavior supersede intellect and compassion. The film illustrates how typical schoolyard behavior that many may dismiss as a rite of passage (cliques, bullying and scapegoating), unchecked, can have fatal consequences. Compared to the book, the events in the film seem accelerated, and perhaps they should be. Brook opined that it wouldn’t have taken very long for the kids, without direction, to lapse into anarchy. Constructs like civilization and laws are a veneer to the ugliness that lies underneath. Lord of the Flies is an exploration of the end of innocence, and human nature at its darkest.
Posted by Barry P. at 10:32 PM