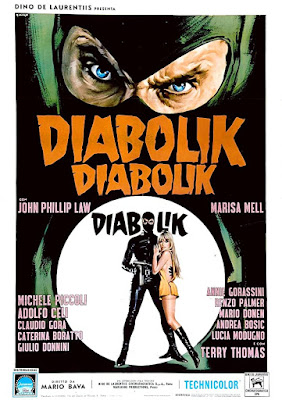 Danger: Diabolik! (1968) Director/co-writer Mario Bava’s delicious artifact from the swinging ‘60s, based on an Italian comic, oozes style and sex from every pore. Bava and crew make the modestly budgeted production look like it cost millions of dollars, thanks to an endless parade of colorful action sequences, inspired sets and groovy fashions. Add a dynamite score by Ennio Morricone to the mix, and you’ve got an irresistable combination.

John Phillip Law stars as the ultra-cool eponymous super-thief Diabolik, who occupies a cavernous underground lair with his girlfriend/partner in crime Eva (Marisa Mell), while plotting his next heist. He thwarts the authorities at every turn, proving no treasure is beyond his grasp. Adolfo Celli (Thunderball) is good as Diabolik’s nemesis, a crime boss in cahoots with the corrupt police. Danger: Diabolik is a testament to style over substance, with logic and story taking a back seat. When you’re having this much fun, however, you’ll scarcely notice. 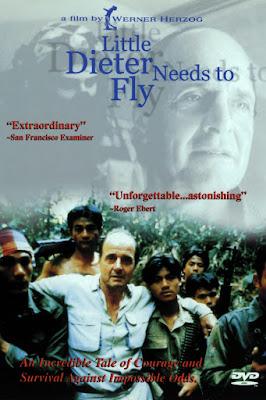 Little Dieter Needs to Fly (1998) Werner Herzog’s fascinating documentary is an unsentimental profile of U.S. Navy pilot Dieter Dengler, who spent several months as a prisoner of war in Laos during the Vietnam war. Herzog eschews much of his usual narration, in favor of Dengler’s matter-of-fact recollections about living under conditions that would have broken most of us. The film chronicles Dengler’s affinity for aviation, starting with his early life in post-war Germany, his journey to the United States, and his stint as a Navy pilot in the 1960s. We see a portrait of resilience under extreme duress, contrasted with his present-day rituals, quirks and idiosyncrasies. 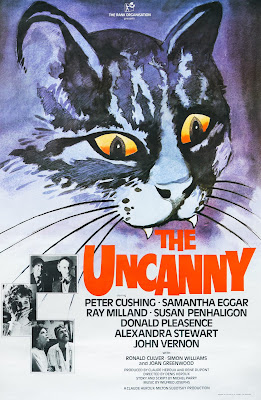 The Uncanny (1977) This amusing, albeit slight, anthology film from former Amicus producer Milton Subotsky and director Denis Héroux, is a three-in-one exploration of the evil agenda behind our feline companions. Peter Cushing plays Wilbur, an obsessive crackpot who believes he’s being watched and persecuted by cats. He brings his treatise (a collection of research that “proves” the pets want to rule our lives) to his skeptical literary agent (Ray Milland). Thus, begin three supernatural segments (“London 1912,” “Quebec Province 1975,” and “Hollywood 1936”), dealing with feline mischief through the decades. Unfortunately for Wilbur, the only thing the stories prove is the cats are in the right, and people had it coming all along.

Rating: ***. Available on Blu-ray (Region B), DVD and Amazon Prime 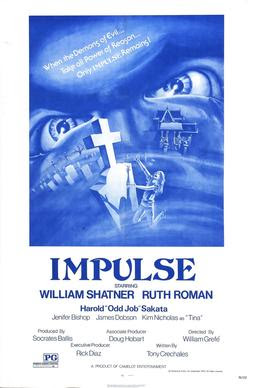 Impulse (1974) William Shatner, at his scenery chewing best, plays Matt Stone, a sociopathic conman with an oral fixation. Impulse borrows (i.e., rips off) heavily from The Night of the Hunter, with its basic plot, and a shot of a corpse in a submerged car. Stone’s latest target is a lonely widow (Jennifer Bishop), who succumbs to his unctuous charms. Only her pre-teen daughter (Kim Nicholas) knows he isn’t what he appears to be. In a movie full of facepalm-inducing moments, a surreal highlight is Stone chasing Karate Pete (played by Harold “Oddjob” Sakata from Goldfinger) through a car wash. Unbelievable.