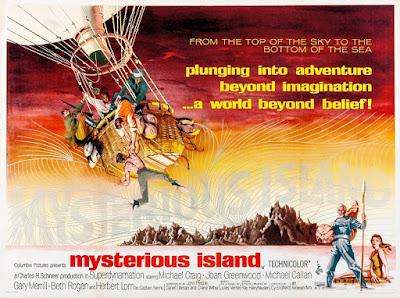 “The original script for Mysterious Island was merely how to survive on a desert island…It was a wonderful Jules Verne story to read, but it was definitely dated, and in order to keep an audience in the theater for an hour and a half, we had to inject certain elements that we felt from the experience in making 7th Voyage (of Sinbad) were very necessary to Mysterious Island.” – Ray Harryhausen (excerpt from 2002 interview) 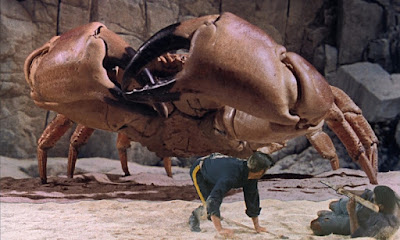 At one time, the world seemed to be a much bigger place, with unexplored corners waiting to be discovered for the first time. Now that satellites have mapped every square inch and you can reach virtually any point of the globe within a day, it’s harder to believe that some uncharted isle exists, untouched by humans, where giant creatures roam. Harder perhaps, but not impossible, if you’re Ray Harryhausen and producer Charles H. Schneer. Jules Verne’s sequel to 20,000 Leagues Under the Sea was filmed at least twice before, starting with a 2-strip Technicolor hybrid silent/talkie (1929), starring Lionel Barrymore, followed by a 1951 serial with Richard Crane. Columbia’s 1961 version provided another chance for Harryhausen to work his stop-motion wizardry. The studio footage was lensed at Shepperton Studios, while the “island” footage* was shot on location in Spain (where 1957’s The 7th Voyage of Sinbad was also filmed).

* Fun Fact #1: Before settling on the Spanish coast, Harryhausen traveled to the Caribbean to scout out possible filming locations for the film. Trinidad, Tobago and islands surrounding Cuba were among the locations considered. 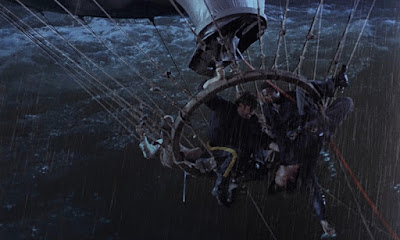 The film opens at the tail end of the Civil War, in a Confederacy stockade, where a group of Union prisoners plot their escape. The prisoners, led by Captain Cyrus Harding (Michael Craig) and war correspondent Gideon Spilitt (Gary Merrill), take off in a stolen balloon. After being cast adrift for days over the open ocean, they manage to crash land their damaged craft on the eponymous island. Soon after, they’re joined by shipwreck survivors Lady Mary Fairchild and her niece Elena (Joan Greenwood and Beth Rogan). Together, they endeavor to tame the chaotic landscape, fighting off hostile creatures and raiding pirates. But little do they suspect that their movements are under the watchful eye of an unseen individual. 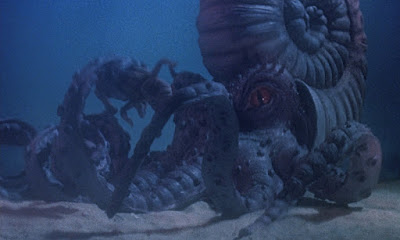 Naturally, it wouldn’t be a Harryhausen film without the requisite menagerie of stop-motion animated wonders.* A fight with a giant crab ** and a giant flightless bird (Phorusrhacos)*** are suitably engaging. One of the most spectacular sequences depicts soldier Herbert Brown (Michael Callan) and Elena, as they’re sealed into a honeycomb cell by an over-industrious bee. When considering the bulk of the effects master’s work, one creature that doesn’t get mentioned nearly enough is a gargantuan sea monster, the Nautiloid Cephalopod, a monstrous version of a chambered nautilus. Perhaps the best (uncredited) special effect, however, is Callan’s pompadour, which manages to stay perfect throughout his considerable cinematic ordeals (I suppose it’s best to suspend one’s disbelief, rather than speculate where he kept his constant supply of pomade).

* Fun Fact #2: Among sequences that were planned but never filmed were a man-eating plant and a mechanical digging device built by Nemo.

** Fun Fact #3: If the crab appears lifelike, it’s because Harryhausen used a real crab, cleaned out, with a metal armature inside (created by his father), for the animated sequences. In the Blu-ray commentary, Harryhausen stated that he purchased the crab from Harrods department store in London. In addition, six live crabs were reportedly utilized for close-ups, and subsequently eaten by the crew (Talk about playing with your food!).

** Fun Fact #4: According to Harryhausen, the crew used a cardboard cutout to create the shadow of the giant bird, when it first makes its appearance. 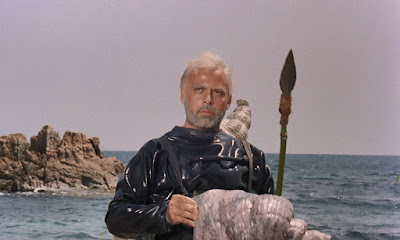 Arguably, no one watches a Ray Harryhausen movie for the performances, but Herbert Lom is memorable as Verne’s enigmatic genius inventor/avenger of war, Captain Nemo.* Although he doesn’t show up until more than two-thirds of the way in, he makes his entrance in spectacular fashion. Compared to James Mason in 20,000 Leagues Under the Sea, he had far less screen time to establish his character, but he makes those minutes count, conveying a brooding, time-worn Nemo with a fatalistic streak. Lom lends a quiet gravitas, which ranks among the best realizations of the character.

* Fun Fact #5: It’s difficult to fathom (pun intentional) the film without Captain Nemo, but an early version of the script by Ken Kolb omitted the character. 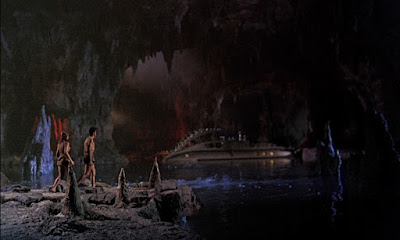 Mysterious Island may not have quite the same polished level of visual splendor of Disney’s lavish 1954 production of 20,000Leagues Under the Sea, but it mostly succeeds, thanks to Harryhausen’s idiosyncratic creations, and Bernard Herrmann’s rousing score. Instead of copying Disney’s version of Nemo’s submarine The Nautilus, Harryhausen went back to the drawing board, interpreting Verne’s original descriptions. The final result compares favorably to Disney’s version, credibly reflecting something that could have been constructed in the 1800s.* The interior sets are a bit of a mixed bag. The ship’s main saloon is a good approximation of the 1954 version (including a pipe organ**), although the engine room seems a bit spartan, and not as logically laid out. The diving suits win points for their fanciful, albeit cost-cutting design, with stock scuba suits disguised by giant shells.

** Fun Fact #6: In a callback to Disney’s film, Nemo plays Bach’s ubiquitous piece, “Toccata and Fugue in D minor” (apparently the tune of choice for megalomaniacs with pipe organs). 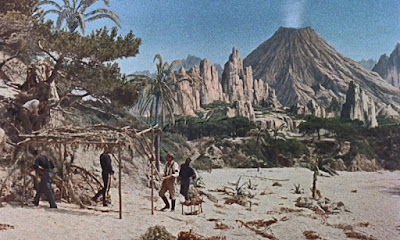 Mysterious Island pays lip service to having a bigger message, with Nemo attributing all the problems of the world to hunger (his solution is to create giant creatures and towering fields of wheat). It’s a simplistic answer to a complex question, but we don’t really want to dig that deep, do we? I’ve often referred to Harryhausen’s films as “Saturday matinee” material, which isn’t intended as a pejorative jab. The intent of the filmmakers was never about pondering the evils and ills of the world, but to provide an escape for 90 minutes or so. Whether it’s in the theater or (considering recent events) our living room, Mysterious Island whisks us away to a place where our cares and fears vanish for the duration of the film – something we could all use right now.
Posted by Barry P. at 11:20 PM