A Rant About Ratings 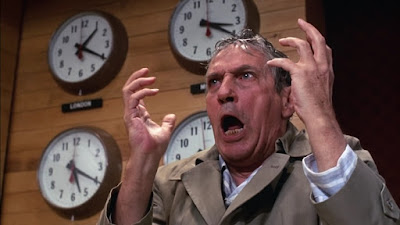 I hate rating movies. Don’t get me wrong, it’s a necessary evil, I suppose. It’s what you’re supposed to do when you review films, right? It’s a thumbnail sketch of my opinion, in easy-to-digest, minimal thought-inducing form. It’s all you’d ever need to know. You don’t even need to read my review, right? But hold your horses pardner; star ratings don’t tell the whole story.


Several months ago (I’m not great with time, so this could have been more than a year ago), I held a Twitter vote to gauge opinion about doing away with starred ratings altogether. Much to my chagrin, but not necessarily surprise, voting was skewed heavily in favor of keeping the dreaded system. I get it. I’m guilty of the same damn thing. It’s a busy world with things to do, people to see and amusing pet videos to ooh and aah at. It’s a whole lot easier to take something at a glance before we move on to the next thing. In this society of diminished attention spans and multiple distractions vying for our collective attentions, we want to cut to the chase. Growing up in my family of origin, I was constantly subjected to a skewed interpretation of movie reviews, as if “It was rated a three” told me anything useful. A three? By whom? A great hand descended from the heavens and dubbed the film a “three”? Nope, there was no divine intervention, just good old fallible humans and a severely flawed rating system from a local TV reviewer, newspaper, etc… But that one rating became my family’s indisputable authority on whether something was worth watching. The progression of this single-rating authority has been rating aggregate sites like Rotten Tomatoes, Metacritic and IMDB. They do the thinking for us, despite the fact not all reviewers are alike, nor does each critic necessarily evaluate movies with the same criteria. As a result, there’s not much reliability or validity to these scores.


Not all ratings, including my own, are created equal. I chose the boring but venerable 5-star rating system, but whether you use numbers, stars, skulls, cute little aliens, or whatever, it all amounts to the same. You’re quantifying a subjective thing. What you see from me is a composite. The ratings I slap on my reviews are a compromise between quality and watch-ability, all smooshed into one neat little package. The ratings don’t mean much in terms of favorites, or a desire to re-watch the movie multiple times. While Downfall might get a high rating from me, one viewing is enough to last a lifetime, whereas Island of Lost Souls merits repeat viewings.


And another thing. I’ll be the first to admit my ratings are not infallible, and occasionally inconsistent. Maybe I was having a bad day, and the movie didn’t click with me at that moment, or maybe I was sleepy, and couldn’t concentrate. In the latter case, it wasn’t really boredom but fatigue that dictated a less than glowing review. At their best (I’m using the word “best” loosely), however, my reviews are like a mini courtroom in which I present the prosecution and the defense, exploring the good and not-so-good aspects of the movie. I’m also judge and jury, but so are you. Based on the testimony, perhaps you’ll arrive at a different verdict. The star rating alone won’t lead you to any further exploration


With that in mind, let’s revisit my admittedly flawed ratings system:


***** = It’s a masterpiece, right? But what’s a masterpiece, anyway? It’s all relative, although I suppose the best answer is that these are movies that are perfect to me. I wouldn’t want to change a thing with Alien, The Thing, Metropolis, Spirited Away, or Five Easy Pieces.


**** = Many of my favorites reside here. Why four stars and not five? I’m a sucker for imperfection. These titles might not be “perfect,” but that’s why they work so well for me. Labyrinth, Phantasm, Eyes Without a Face, Gremlins, and many, many others fall into this category.


*** = These movies have some wonderful and not-so-wonderful moments. Some had the potential for greatness, while others had no such lofty pretentions, and are as good as it gets. They teeter on the boundary between trash and treasure. Brain Damage, Ice Cream Man, Demons and Logan’s Run are some notable examples.


** = It’s a mess, beyond repair. Something might have saved it, but I’m not sure what that would be. I’m looking at you, Terror Train and Young Einstein.


* = As an optimist in pessimist’s clothing, I want to believe the best intentions in a movie. Hating a movie isn’t inherently in me, which is why this might be the rarest rating of all. This rating is reserved for titles with no redeeming qualities, which offended me on a cellular level. Mac and Me has earned its rightful place here.


You won’t find many one or five-star reviews, because most movies don’t fall in this range. Contrary to many Netflix or Amazon user reviews (no offense intended to those who evaluate movies on Netflix or Amazon, you’re all fine people), most movies aren’t worthy of the loftiest praise or eternal damnation. That’s why you’ll find the vast majority of my reviews fall within the two- to four-star range. You’ll find three-and-a-half-star ratings most frequently on my blog. It’s a sweet spot for me. In many instances the film’s reach might have exceeded its grasp, but I was glad to go along for the ride. Taste the Blood of Dracula, The Blob, and Executive Koala are just a few examples. By far, my most misunderstood rating is two and a half stars. These movies showed a lot of potential, and I might even enjoy them in parts, but they have too many strikes against them. Dune, Demon Seed, and Hardware are ones that I’m perennially on the fence about. Some titles might merit re-evaluation from time to time. My opinion has remained relatively consistent over the years, so it’s relatively rare when I reverse my opinion, but hey, it happens.


So, there you have it. The star ratings aren’t going away for now, but I don’t like ‘em, and don’t be too surprised if I eschew ratings altogether in a future incarnation of this blog. My star ratings are not the final word on the subject. If you enjoyed the movie more than I did, great. If you didn’t like it as much as I did, or even hated it, that’s fine too. I’m pleased by those who have chosen to visit and re-visit my blog for reviews, so I feel I’m doing something right. But even I’m not delusional enough to believe that everyone agrees with my opinions all the time. Oh, and please read my reviews in their entirety, because starred ratings suck.
Posted by Barry P. at 10:27 PM