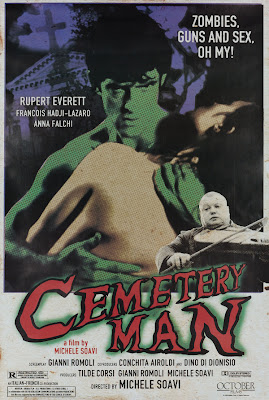 (1994) Directed by Michele Soavi; Written by Gianni Romoli; Based on the novel Dellamorte Dellamore by Tiziano Sclavi; Starring: Rupert Everett, François Hadji-Lazaro and Anna Falchi; Available on DVD
Rating: *** ½
Cemetery Man is a beguiling mixture of horror, comedy and sex that’s sure to endear some viewers and frustrate others.  Admittedly, my first impression of the film 17 years ago wasn’t exactly favorable, but I realized that opinions occasionally change over time, and decided to give it another go.  A second viewing led me to the realization that my initial take was faulty, as I succumbed to Cemetery Man’s eccentric charms.
The original Italian title Dellamorte Dellamore means “of death, of love,” which is really more descriptive of the film as a whole, rather than the somewhat generic sounding Cemetery Man.  The film was based on Tiziano Sclavi’s novel Dellamorte Dellamore, which was an offshoot of his comic, Dylan Dog (whose main character intentionally resembled actor Rupert Everett).  It wasn’t too surprising to learn that Everett was in fact the filmmakers’ first choice for the lead in Cemetery Man. 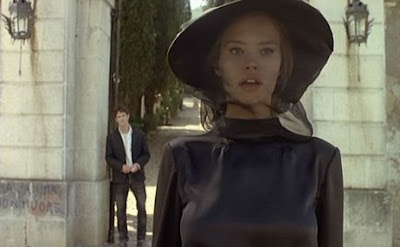 Dellamorte Dellamore also references Everett’s character, Francesco Dellamorte (his mother’s maiden name was Dellamore), whose behavior clearly embodies the duality of death and love.  Dellamorte works in Buffalora cemetery, along with his mentally deficient companion Gnaghi (François Hadji-Lazaro).  The dead, referred to as “returners,” keep rising up after they’re buried, and it’s his job to keep them down. The hapless Dellamorte lives a world-weary existence, painfully aware that he’s living a farce. Everett provides a window to Dellamorte’s philosophies about life, love and death, through his wry voiceover commentary.
Describing his friend and co-worker, Dellamorte observes “…On his ID card, it reads: ‘Distinctive visible marks: All.’” Gnaghi sort of resembles a cross between Curly Howard and Jackie Coogan’s Uncle Fester, but decidedly less articulate.  Slow-witted but intensely loyal, Gnaghi is an unlikely companion, who’s also a constant in a sea of change.  Together with Dellamorte, they’re an unlikely duo that evokes comparisons to Of Mice and Men.  Amidst death and violent re-birth they’re both just looking for the right woman, although Gnaghi will settle for just part of a woman. 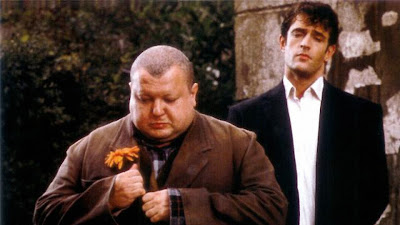 Anna Falchi, plays multiple roles as the ubiquitous She: first as a widow, then as a zombie, followed by a mayor’s aide, and a nubile young student.  She is the archetypal love interest for Dellamorte, representing someone who’s alternately unobtainable and licentious -- virtually a force of nature to be reckoned with.
Cemetery Man was directed by Michele Soavi, whose resume boasts just as much experience in front of a camera as behind it.  As a disciple of Dario Argento, his morbid excesses are in full display, but he strays from his mentor by displaying a lighter side too.  He also worked under Terry Gilliam as a second unit director, and it’s easy to spot Gilliam’s influence, particularly with regard to Dellamorte’s exchanges with a Grim Reaper figure.  Soavi is interested in the roles each character plays, not afraid to jumble them around like figures in a chaotic board game where the rules have been lost. 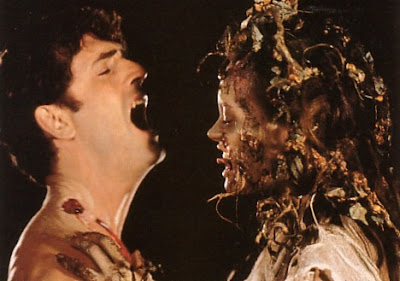 One of the more disorienting aspects of Cemetery Man is how rapidly it shifts between broad comedy, dark satire, and absurdist farce.  The strange combination doesn’t always work, but it’s fun to be taken for a ride and sample the sensory overload.  Like a carnival attraction cobbled together from various unrelated parts, it’s a haunted house, funhouse and the tunnel of love, all in one.  It’s an approach designed to stimulate discussion, not box office receipts.  One of the more amusing scenes involves a mourning political figure who sees his grief over his daughter’s untimely death as an opportunity to garner sympathy (and votes) from his constituents. 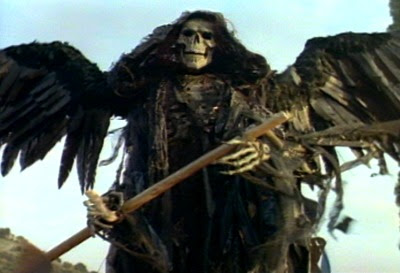 Director Michele Soavi’s unique movie starts off like a zombie flick (or a parody of zombie flicks), and abruptly takes an existential detour.  It works best while it’s in the cemetery, pondering all things life and death, but loses some momentum in the third act, as Dellamorte leaves the cemetery to paradoxically explore his darker side.  Cemetery Man finds its way again in an ending that’s delightfully absurd and thoughtful.  Where it starts out is not where it ends.  Whether it works as a whole, stylistically or story-wise is open for debate, but one thing is for certain – with Soavi’s unholy blend of Grand Guignol humor, sex comedy, and political satire, he didn’t play it safe.  Recommended as a head-scratching non-traditional entry in your Halloween movie marathon line-up.
Posted by Barry P. at 7:00 PM