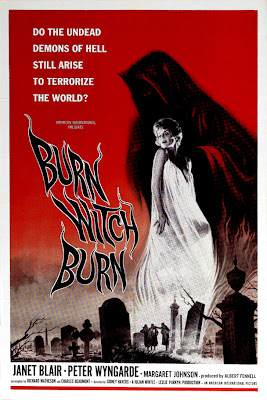 Burn, Witch, Burn (aka: Night of the Eagle) (1962) I recently stumbled upon this great little forgotten gem, based on a novel by Fritz Leiber, Jr.  Leiber’s story was adapted by Richard Matheson and Charles Beaumont (known primarily for their numerous contributions to The Twilight Zone), but George Baxt purportedly had a hand in the screenplay as well.  Peter Wyngarde plays pragmatic college professor Norman Taylor, who’s appalled to discover that his wife Tansy (Janet Blair) has been dabbling in witchcraft.  Norman, the consummate empiricist, sees her behavior as an affront to his intelligence, and unwisely decides to throws out all of her talismans.  As his luck starts running out and his life quickly becomes unraveled, he’s forced to re-evaluate his belief system.  Burn, Witch, Burn starts with an over-the-top voiceover introduction by Paul Frees (otherwise known as “Your Ghost Host,” for all of you Disney Haunted Mansion aficionados out there), providing an incantation to protect all of the filmgoers in the audience from evil.  It’s a fun little gimmick that sets the mood for the old-fashioned thrills that follow.  Catch it if you can!
Rating: ****.  Available on DVD (MGM movie-on-demand) and Netflix Streaming. 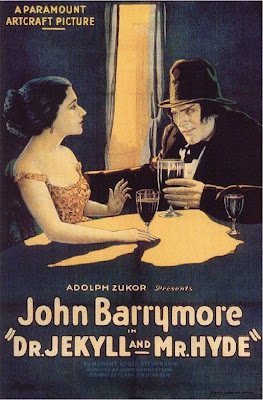 Dr. Jekyll and Mr. Hyde (1920) This silent version of Robert Louis Stevenson’s classic tale starts a little slow, but gradually builds momentum.  John Barrymore does a commendable job in the dual role of Jekyll and Hyde.  As the mild-mannered Dr. Jekyll, he’s a paragon of virtue, altruistic and inhibited.  He searches for a way to split the self while leaving the soul intact, and develops a drug that he believes will do just that.  Thanks to Barrymore’s unhinged performance and some convincing makeup, Mr. Hyde is genuinely creepy, with his unnaturally long fingers, funky teeth, and oddly shaped head – a fitting embodiment of the Id.  His stooped figure resembles a predatory creature, ready to strike at a moment’s notice.  This distinctive iteration of Hyde led me to wonder if it could have influenced the look of the iconic title character in Nosferatu (which was released just two years later).  In one surprisingly disturbing scene late in the film, Dr. Jekyll struggles with his inner demons, encountering a hideous Hyde-spider; a nightmare-inducing image that you won’t soon forget.  One of the film’s conceits is that we have a choice in our inherent duality, and what sort of person we decide to become.  In Jekyll and Hyde’s case, neither side completely takes possession – their personalities remain influenced by each other.  Which self will triumph in the end?
Rating: ****.  Available on DVD. 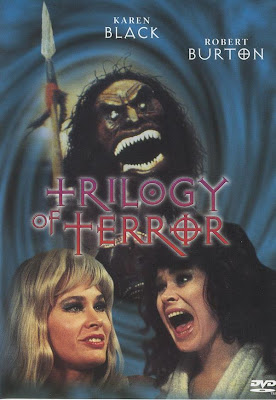 Trilogy of Terror (1975) It’s a Karen Black showcase!  Dan Curtis directed this made-for-TV movie, consisting of three Richard Matheson-penned stories and four roles by Ms. Black.  The first two segments are better categorized as suspense stories, while the third (and easily the best) undeniably qualifies as horror.  “Julie,” is about an English professor and her obsessive male student.   Just when you think you know where the story is going, the conclusion takes an unexpected turn.  The second segment, “Millicent and Therese,” is less effective, and concerns two sisters: one is quiet and repressed, while the other is boisterous and unrepentant (both played by Black).  You can sniff the “twist” ending a mile away.  The anthology ends on a high note with the last story, “Amelia.”  Once again, Black plays the main character.  She purchases a Zuni warrior fetish doll for her boyfriend’s birthday, and fails to heed the warnings that the figure is possessed by a witch doctor’s soul; that is, until it suddenly turns homicidal.   Trilogy of Terror is worth watching for Karen Black’s versatile performances, and especially the great final story.  Give it a spin!
Rating: *** ½ .   Available on DVD. 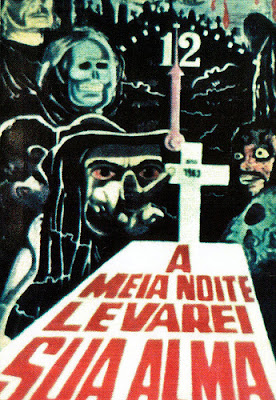 At Midnight I’ll Take Your Soul (aka: À Meia-Noite Levarei Sua Alma) (1964) This is where Brazilian writer/director/star José Mojica Marins’ long-running Coffin Joe series began.  I’ll leave it to you to decide whether that’s a good or bad thing.  Zé do Caixão (otherwise known as Coffin Joe) is the undertaker in a small village, and death follows him wherever he goes.  He roams the village at night, on a quest for the woman who will bear his child, killing and maiming anyone who dares to stand in his way.  The gruesome depictions of violence might seem surprising to those who are accustomed to horror films of the same period from the U.S. and England.  Marins seems to enjoy depicting Coffin Joe’s special brand of sadism a little too much for my taste, but the film does have its creepy, atmospheric moments.  Coffin Joe strikes an imposing figure in his trademark black cape, top hat and freakishly long nails.   He impulsively acts out his credo, that life and death are intertwined, but paradoxically fears dying himself.  At Midnight I’ll Take Your Soul is difficult to look at, yet difficult to look away.  It might not be everyone’s cup of tea, but it’s certainly unique.
Rating: ***.  Available on DVD. 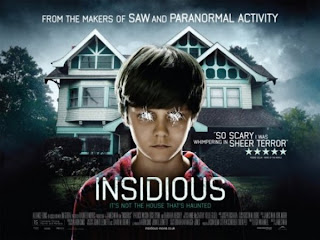 Insidious (2010) Josh and Renai Lambert are young parents whose quiet, normal suburban lives are thrown into disarray when their son Ty mysteriously ends up in a vegetative state.  The grieving parents encounter strange visions, leading them to move out of one house and into a new one, only to have the incidents continue.  They slowly come to the realization that it’s their son, not the house, that’s haunted.  Director James Wan and writer Leigh Whannell were aiming for something a cut above the usual ghost story, and partially succeeded.  Insidious is rife with obvious nods to Poltergeist, and produces some good scares, as well as some not-so-good scares.  It starts with a less-is-more approach, but devolves into more-is-less, getting a little goofy towards the end as some of the spirits that are hinted at are seen more clearly.  The supporting ghosts are more effective than the star creep, a demon who’s more laughable than menacing.  The leads are generally fine, but Barbara Hershey seems to have phoned in her performance as Josh’s concerned mother.  Insidious doesn’t quite live up to its promise, but it’s not bad as a minor addition to your Halloween horror movie marathon.  If nothing else, the filmmakers deserve kudos for including Tiny Tim’s horrific rendition of “Tiptoe Through The Tulips,” to keep the audience on edge.
Rating: ***.  Available on DVD and Blu-ray. 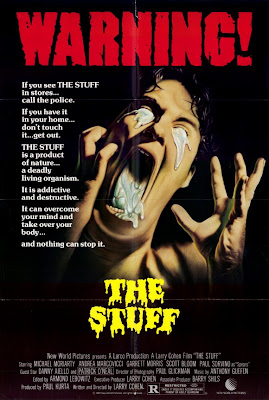 The Stuff (1985) Michael Moriarty stars as corporate spy Mo Rutherford (“…’cause when people give me money, I always want mo’…” Get it?  Hey, you can blame writer/director Larry Cohen for that piece of groan-worthy dialogue.).  He’s determined to find out the origins of The Stuff, a new zero-calorie dessert that’s suddenly popping up in every corner grocery store.  The first half is subversive fun, skewering mass consumerism and satirizing the masses who blindly accept whatever’s marketed to them.  It’s a scenario reminiscent of Invasion of the Body Snatchers as more and more people fall victim to the deadly dessert and its addictive properties.  It’s too bad that the script eventually loses its way, starting with unfunny scenes involving a paramilitary leader played by Paul Sorvino, who joins Mo in the fight to rid the world of The Stuff.  The ending seems rushed, as if the producer ran out of money, and Cohen didn’t seem confident about what to do with the dilemma he constructed.  The final scene attempts to bring the story back on track, but it’s too late to undo the damage that’s been done in the preceding scenes. Ultimately, it’s a near miss.
Rating: ** ½.  Available on DVD. 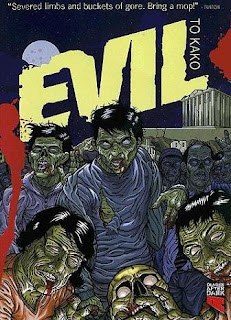 Evil (2005) This is the best Greek zombie movie I’ve ever seen.  Oh, wait a minute.  It’s the only Greek zombie movie I’ve ever seen.  Sorry… a bad movie deserves an equally bad joke.  My only explanation for the earnest but inept story is that the filmmakers constructed an entire zombie film based on second-hand recollections of zombie films.  Evil fails to convince on all levels, with unbelievable (and unlikable) characters, sub-par special effects and bad cinematography that screams “shot on videotape.”  People spontaneously become flesh-eating zombies for no apparent reason.  The film is never consistent enough to establish exactly how the affliction is transmitted.  There are some half-assed attempts at humor, as the characters kill off the growing zombie hordes using anything at their disposal (shoe, candlesticks, etc…).  It’s also never clear about the correct way of dispatching the zombies.  A shotgun blast to the chest seems to be just as effective as a blow to the head.  I would never fault the low budget, but I can’t abide laziness.  I suppose this film could be considered a curiosity, but that’s not reason enough to waste 83 minutes of your life.
Rating: **.  Available on DVD.
Have a great Halloween!
Posted by Barry P. at 8:00 AM