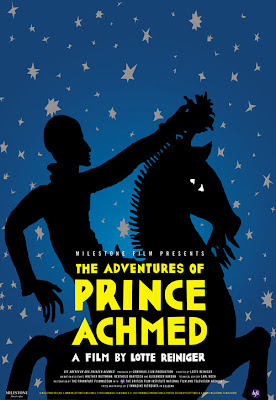 The Adventures of Prince Achmed (1926) This German silent film from Lotte Reiniger represents a landmark in cinema and animation.  It might appear somewhat crude to modern eyes, but this is where animated feature films got their start.  Black silhouetted figures and tinted scenes contribute to the movie’s unique look, which took three years to create.  It possesses a dreamlike quality that’s unlike anything else I’ve seen.  The story is based on One Thousand and One Nights (better known as Arabian Nights), and includes many of the characters we’ve become familiarized with in other movies borrowing from the same source material.  There’s an evil sorcerer, a Caliph (often referred to as the Sultan in other versions), along with his beautiful daughter and her suitor Aladdin.  Many of the story elements that we’ve seen before are here, but rearranged slightly.  This time, the focus is on the Caliph’s son Prince Achmed, with Aladdin taking a supporting role.  Despite the well-worn story components, the presentation is inventive and completely unforgettable.  Highly recommended for fans of animation, silent movies, or anyone with a pulse.
Rating: **** ½ ; Available on DVD. 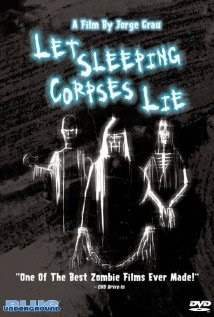 Let Sleeping Corpses Lie (AKA: The Living Dead at Manchester Morgue) (1974) Just when I thought I’d seen everything that the zombie genre could dish out, along came this surprisingly effective entry.  Instead of voodoo spells, esoteric chemical compounds, or a virus, the cause for the zombie outbreak is attributed to an experimental device that kills pests through sonic radiation.  Unfortunately for the local populace, the device has an unwanted side effect on the developing nervous systems of infants and the recently deceased.  The former become violent, while the latter are suddenly reanimated and have an insatiable hunger for human innards.  Too bad the researchers, as well as local law enforcement personnel are slow to catch on.  Edna and George are the first to discover that something is awry, but they’re unable to convince the hateful police inspector (who apparently thinks all younger people are junkies, hippies, or both) that walking corpses are responsible for the recent mayhem in the countryside.
There are some genuinely scary moments to help set the mood.  In one notable scene, the main characters are trapped in a crypt with the living dead, with no discernible way out.  The makeup effects are generally well done, providing ample doses of blood and guts to satisfy the most discriminating gore hound.  The only real downside of Let Sleeping Corpses Lie is the assortment of unlikable/uninvolving characters.  Most of them are too mean, underdeveloped or stupid to really generate any feelings of empathy from the viewer.  This isn’t quite the fatal flaw that it might be in other movies, however, since they’re not much more than zombie fodder anyway.  The main attraction is the flesh- eating zombies, and in that regard this film really delivers.
Rating: ***; Available on DVD and Netflix Streaming. 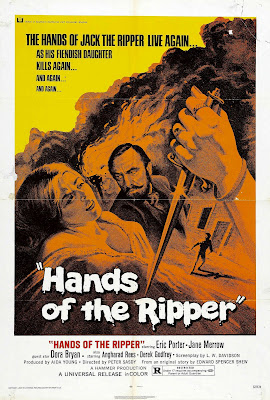 Hands of the Ripper (1971) As a toddler, Anna witnesses the murder of her mother by Jack the Ripper, who also happens to be her father.  Needless to say, this early childhood trauma creates some deep emotional scarring.  Flash forward about 15 years or so.  When her exploitive guardian is killed under mysterious circumstances, Dr. Pritchard (Eric Porter) takes the now 17-year-old Anna (played by Angharad Rees) under his wing, determined to get to the root of her alleged latent murderous tendencies.  Dr. Pritchard is convinced that he can tap into these early memories, and apply Sigmund Freud’s newly developed psychoanalytic techniques to cure her of her affliction.  Pritchard casually dismisses the risk he’s taking by exposing a potentially homicidal patient to the outside world, but he seems to subscribe to the school of thought that you can’t make an omelet without breaking a few eggs.  What are a few deaths, after all, in the name of science?  Most of the time, Anna seems perfectly mannered and compliant, as long as you keep her away from shiny objects and don’t try to kiss her.  As the body count begins to rise, it slowly dawns on the good doctor that he might have misjudged things a bit.  It’s all a little silly, with psychological explanations that are far too simplistic.  Although the cause-and-effect relationship between Anna’s past experience and her present-day behavior is dodgy at best, Hands of the Ripper still works for the most part.  You’ll probably have a good time if you bear in mind that director Peter Sasdy likely intended to entertain and not present a serious psychological character study.  It’s not the greatest Hammer production, but still worth a look.
Rating: ***; Available on Netflix Streaming. 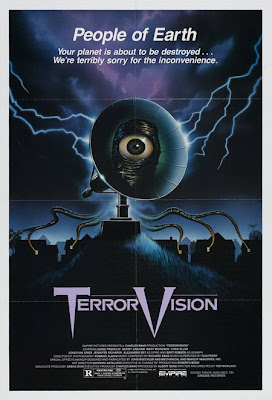 TerrorVision (1986) It’s hard to believe that there are still many movies that haven’t seen the light of day on DVD, even in this information-saturated age.  This is one of them, which might not be such a bad thing.  TerrorVision is mildly amusing at times, but wears out its welcome long before the final scene.  In a far off corner of the galaxy an alien facility disposes of dangerous creatures, transmitting them into space.  Meanwhile back on the planet Earth, a faulty satellite TV dish receives the signal, depositing one of the angry alien beasties into an unsuspecting family’s living room.  Low-budget pandemonium ensues.  Forget about motivation or believability; I think the only guidance that writer/director Ted Nicolaou provided to his actors was to play their parts as broadly as possible.  B-movie stars Mary Woronov and Gerrit Graham seemed to be having fun with their roles as a swinging 80s couple, and there’s a mildly amusing Elvira clone called Medusa (Jennifer Richards), but their moments don’t add up to much.  Most of the scenes in TerrorVision play out like a comedian who laughs at his own jokes -- it’s never as clever or funny as it thinks it is.  After a while, I felt that my brain cells were assaulted.  If an overdose of camp is your thing, then be my guest.  Otherwise, your mid-80s camp quota would be better served by the far superior Night of the Creeps.
Rating: **.  Available on Netflix Streaming.
Posted by Barry P. at 9:36 PM