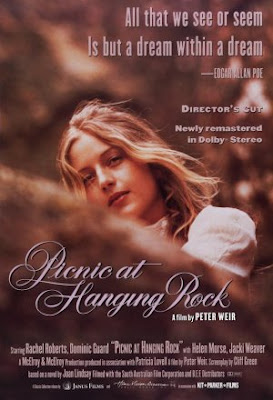 (1975) Directed by Peter Weir; Written by Cliff Green; Based on a novel by Joan Lindsay; Starring: Rachel Roberts, Anne-Louise Lambert and Vivean Gray;
Available on DVD

There’s a special place on my Netflix DVD and instant queues that I like to call Queue Hell.  These are the films that I’ve added over the past several years, but for various reasons couldn’t quite bring myself to watch.  It’s not because they’re necessarily bad films, but some of them have a reputation for being slow or pretentious, or they just don’t match the mood that I’m in at the moment.  Every once in a while, I’ll knuckle down and chip away at Queue Hell, selecting a title at random to inflict on my psyche and stamina.    With the aforementioned reasons in mind, I wasn’t exactly looking forward to watching Picnic at Hanging Rock.  It had all the earmarks of a film that critics adored and average schmoes hated, which made it instantly suspect in my book.  I was pleasantly surprised to discover that I was drawn into this unusual story, despite my initial prejudices.

The setting is Victoria, Australia in 1900.  The prologue would lead you to believe that you’re about to witness events that culminated in a mystery that remains unsolved to this day.  It was kind of a letdown to discover that none of this actually happened, but was purely a work of fiction, based on a novel by Joan Lindsay.  The events are chronicled in a pseudo-historical fashion, maintaining the illusion that this is a factual account.  The students (minus one) from an exclusive girls’ boarding school set off on an afternoon Valentine’s Day outing to the nearby reserve known as Hanging Rock.  Not content to soak in the sun and eat cake, four of the girls decide to wander off and explore the mysterious formation of rocks.  Only one returns, and when their governess attempts to locate the missing girls, she ends up missing as well.  A subsequent exploration of the surrounding area yields few clues to the whereabouts of the lost girls and their ward.  The filmmakers provide no concrete explanation for the mystery, and no resolution is offered.  We are left to speculate on our own about what occurred, based on the few paltry facts that are made available. 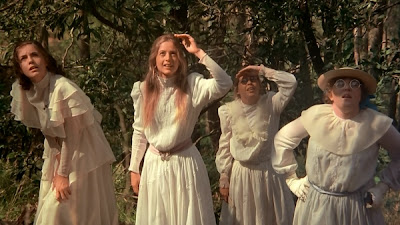 There are probably as many interpretations of Picnic at Hanging Rock as there are reviewers.  Here are a few of my theories:

(1)    The girls met with foul play.  Admittedly, this is the most prosaic explanation, but the motive is there.  In an early scene, two young men ogle the girls as they wander off into the rocks, and presumably into the unknown.  It doesn’t take too much of a stretch of the imagination to imagine that the students would be easy prey for the local men.  After all, there were probably a million places that the bodies could have been hidden in the remote terrain.

(2)    A paranormal occurrence was responsible for the girls’ disappearance.  The film doesn’t go out of its way to support this assertion, but it doesn’t close the door on this possibility.  On the way to the picnic, one of the students makes the foreboding comment that Hanging Rock has been waiting a million years for them.  Edith (Christine Schuler), the girl who returned from the rocks, recalls that a red cloud was in the sky when her companions disappeared.  The presence of the cloud suggests some otherworldly explanation.  Was it aliens?  Aboriginal spirits? It’s anyone’s guess.

(3)    The girls’ disappearance is a metaphor for the end of innocence.  They’re dressed in virginal white dresses that cover them from head to toe, contrasting the reddish brown formations of Hanging Rock.  They seem entirely out of place in this harsh environment.  Their escape, if only fleeting, represents a way out of their oppressive surroundings.  When they remove their shoes and stockings (gasp!) to climb upon the rocks, it’s a liberating experience.  Edith, the most inhibited of the lot, does not partake in her companions’ actions, and runs screaming back to the join the others at the picnic.  She failed or passed the test, depending on your point of view.

Picnic at Hanging Rock’s contemplative, measured pace is actually an asset.  So much of what happens is internalized by the characters, leaving their experiences and motives open to speculation.  Nothing is dumbed down for the audience.  Director Peter Weir doesn’t provide answers, only more questions. 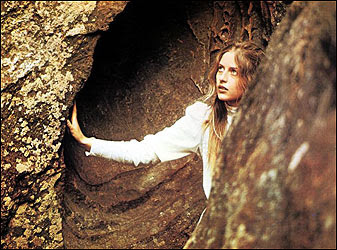 Another search for the missing girls ends in the discovery of Irma (Karen Robson), alive and relatively unscathed.  Irma, however, has no memory of what happened to the others.  It’s another part of a jigsaw puzzle that stands alone, without any directly adjoining pieces.

The primary subplot involves an orphan girl who stayed behind, Sara (Margaret Nelson), and her friendship with one of the missing girls, Miranda (Anne-Louise Lambert).  Sara is portrayed as a quiet loner.  Her only friend at the school appears to be Miranda.  The nature of their relationship is never fully explored, but a brief conversation between them provides one of the only clues to Miranda’s disappearance.  The morning of the picnic, Miranda confided to Sara that she would not be around much longer, ominously foreshadowing the strange course of events that would follow. 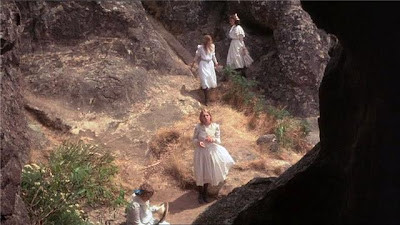 The film’s music does an effective job of underscoring the enigmatic story and images of otherworldly rock formations.  Bruce Smeaton’s score is suitably ethereal, accompanied by haunting flute music by none other than Gheorghe Zamfir (whose name older readers might recognize from the 80s’ commercial for “Zamfir, Master of the Pan Flute”).

The film’s pseudo docu-drama format almost seems to be the spiritual predecessor of the “found footage” sub-genre that would emerge a couple of decades later.  It probably wouldn’t make much of a difference if Picnic at Hanging Rock had been a retelling of a true event, because you become immersed in the reality of the film.  It’s a Rorschach test.  What you see in it has much to do with what you bring to the table.  Your own assumptions will determine the story’s ambiguous conclusion.  What really happened in those rocks is less important than the mystery itself.  If Weir had wrapped up the ending with an explanation in a neat little package at that end it would certainly have been disappointing, compared to what our mind’s eye could concoct.
Posted by Barry P. at 1:10 AM