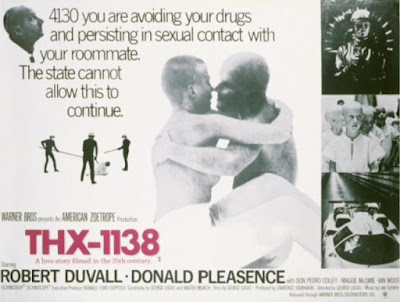 “…It was designed really to be an experience, a metaphor about the way we lived in the early ‘60s; about consumerism, about conformity, disintegration of emotions, about trying to make everything perfect in a way that was nightmarish.” – George Lucas

Note: The film version used for this review was the 2004 “director’s cut” edition, which incorporated several computer-enhanced shots, similar to Lucas’ controversial treatment of the original Star Wars trilogy. How does it look? It’s always a double-edged sword when you tamper with a film’s visuals. At worst, it looks distracting (think the CGI Jabba the Hutt added to Star Wars Episode IV), but at best, a few shots arguably provide a bit of extra scope. Nice, but unnecessary.

Depending on your age and point of view, George Lucas is alternately seen as the savior or destroyer of modern cinema. Some individuals, especially those from my generation, have accused Mr. Lucas of ruining their precious childhood with his tinkering of the Star Wars canon, or some such nonsense (nope, my fond childhood memories are quite intact, thank you very much). These same filmgoers have lost sight of the fact that he once represented a bold wave of young filmmakers (including Coppola, Carpenter and De Palma) who transformed the cinematic landscape forever. These filmmakers emerged on the scene in the late ‘60s/early ‘70s with an independent perspective, eschewing the tired Hollywood studio system, while paying homage* to some of the time-honored conventions. This vital period is exemplified by THX 1138, ** George Lucas’ feature film debut from Francis Coppola’s Zoetrope Studios, which combines experimental elements with a hero’s narrative.

* While not mentioned by Lucas, the downward crawl of the credits at the beginning of the film recalls a similar credits sequence in 1955’s Kiss Me Deadly.

** Fun fact: In case you were wondering, the THX audio/video system, also pioneered by Lucasfilm, is not named after the eponymous film, but the company’s sound engineer, Tomlinson Holman. Coincidence or not?

THX 1138 starts off on an oddly ironic and optimistic note, with a pastiche of clips from old Buck Rogers serials, depicting the type of escapist fare Lucas would come to be known for. As the last image vanishes, we are suddenly thrust into a bleak subterranean dystopia,* populated by a homogenized society.** The optimistic “gee whiz” future of Buck Rogers is contrasted with the pessimistic controlled reality where individuals cease to matter. In his DVD commentary, Lucas compared the nominal hero of his film to the Saturday matinee protagonist, as someone who became a hero because he made the conscious decision to do something about his situation.

** Another fun fact: Members of the Synanon drug rehab group were recruited as extras for the film because of their shaved heads.

Robert Duvall stars as the title character, a cog in the machinery of the totalitarian society depicted in the film. He builds automated police officers (authority figures that do not question the morality or imperatives of their duties) by day, and spends his evenings on a steady diet of inane television programming and sedatives. He engages in illegal sexual activity with his roommate LUH 3417 (Maggie McOmie), while grappling with his disintegrating psyche. He confesses his transgressions and eroding emotional state to an automated therapy booth. The computer voice, revealed to be nothing more than a tape recording, interjects periodically with acknowledgements and empty platitudes. Duvall and McOmie are excellent as the doomed, emotionally repressed lovers.

Donald Pleasence is also great as the morally ambiguous SEN 5241.* He finagles his way into THX’s life by manipulating the system to his advantage. He arranges to have LUH pushed out, so he can become THX’s new roommate. In a film that’s mostly downbeat, the bright spot is Don Pedro Colley as SRT, a hologram who somehow escaped the system and has become a rogue intelligence. He provides a surreal touch, prefiguring the concept of avatars and virtual environments by many years.

* Another fun fact: According to Lucas, SEN’s rhetoric-filled dialogue was derived, in part, from Richard Nixon speeches.

For all of its brilliance, Lucas’ experimental film falters in the awkward third act, with a protracted chase scene. THX’s escape in a high-powered car, pursued by automated motorcycle cops, gives way to Lucas’ long-held fascination (some might say fetish) with depictions of speed, chases and automobiles. But why are the cars there in the first place, when it’s clearly established the society in THX 1138 is essentially classless, and there’s a public transit system? Who own the cars, and how would THX, a worker drone, know how to drive? Of course, if Lucas had satisfying answers to these questions, it would obviate the logic of a car chase scene, and we wouldn’t have a third act. One interesting concept that prevails, however, is that police officers can’t exceed a specific budget when apprehending THX (Lucas’ acknowledged dig at the film industry).

* Lucas described his film as having three distinct parts: “conventional,” “abstract,” and “action.”

It’s no surprise that THX 1138 failed to be a commercial success, almost finishing American Zoetrope, and nearly ending the career of its fledgling director. Lucas went in a more marketable, but no less personal direction with his next feature, American Graffiti, and never seemed to look back. But for those who only associate him with more crowd-pleasing, escapist fare, THX 1138 seems positively revolutionary. Its late ‘60s response to conformity is still relevant today. As society has become increasingly estranged from itself, and we continue to immerse ourselves in our petty electronic distractions and blind consumerism, Lucas’ vision is all too prescient. Two-thirds brilliant, one-third tedious, THX 1138 demonstrates we didn’t have long to wait before his science fiction world became a reality.
Posted by Barry P. at 8:54 PM 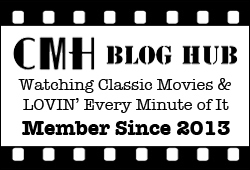