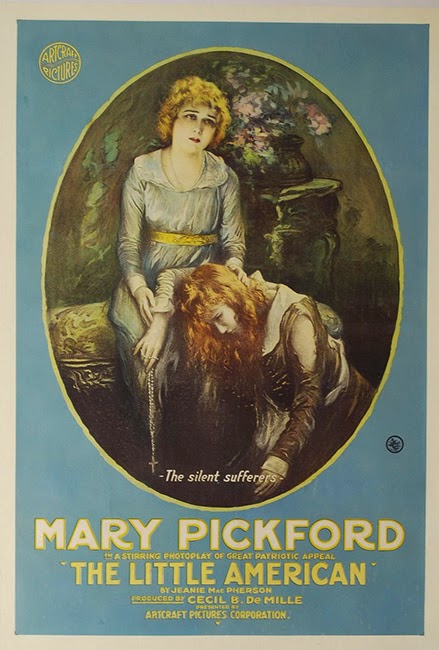 “It pained Mary Pickford’s thrifty soul to wear a $400 dress splashing around in the waters of San Pedro harbor; I think the ruination of the dress pained her more than her immersion in the chilling waters…” – Cecil B. DeMille (On filming the scene depicting the sinking of the Veritania, from The Autobiography of Cecil B. DeMille) 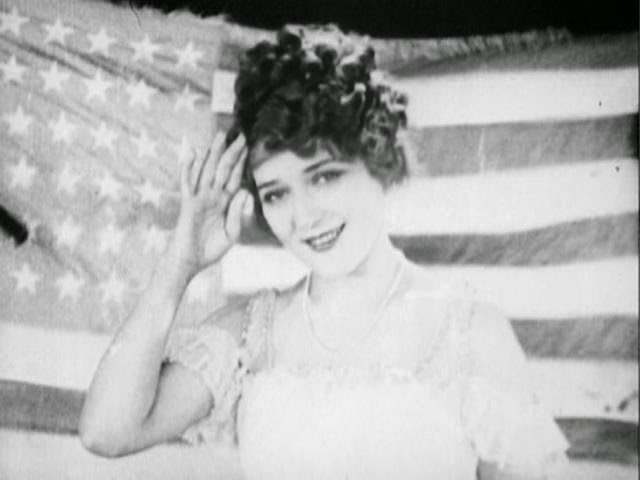 I owe a debt of gratitude to Fritzi Kramer of MoviesSilently and Lea S. of Silent-ology for hosting the World War One in Classic Film Blogathon, and for graciously accepting my review of Cecil B. DeMille’s The Little American. In addition to participating in the blogathon, this entry officially kicks off my second annual month-long exploration of silent film, Silent September, where I attempt to plug the gaping holes in my experience of this vital cinematic era. I have the utmost respect for those who cover silent movies full time, and hope I don’t offend anyone’s sensibilities with my less than scholarly interpretations. 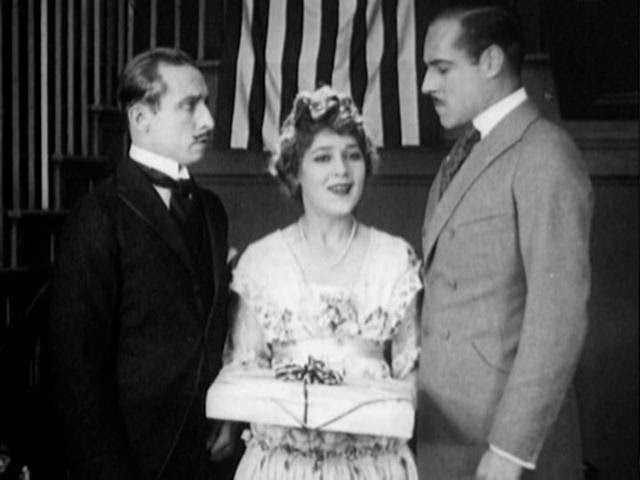 Time hasn’t been particularly kind to DeMille’s second film with star Mary Pickford (after A Romance of the Redwoods), The Little American. Although Pickford spoke highly of DeMille in her autobiography Sunshine and Shadow, she barely mentioned the film*. In his autobiography, DeMille devotes a little more space to The Little American, but details are sparse. Consequently, the film almost seems a mere footnote now, as a stepping stone for Pickford’s formidable career, and situated during a pivotal moment in world history (the film was released shortly after the United States became involved in World War I). The film’s relative obscurity today belies a standout performance by the Canadian-born Pickford as plucky American heroine Angela More.

* Although The Little American didn’t seem to leave much of a lasting impression on Pickford, its subject matter certainly did. Following the release of the film, she became involved in the U.S. war effort, touring around the country with husband Douglas Fairbanks and business partner Charlie Chaplin, to drum up support and entertain American troops. 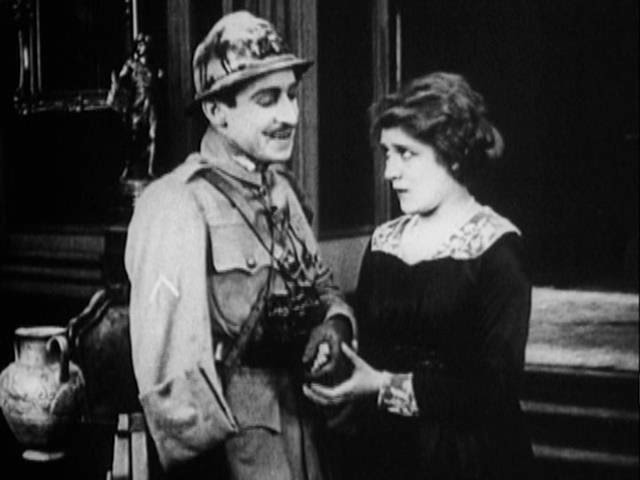 Set in 1914, The Little American begins with two men vying for Angela’s affection, French Count Jules de Destin (Raymond Hatton) and German Karl von Austreim* (Jack Holt). It’s Karl, however, who wins her heart. The story abruptly shifts when he’s called away to fight for the Prussian army. Meanwhile, Jules leaves for France to fight for the opposing side. The plot thickens as Angela sails off to her ancestral home in France, but her ship, the Veritania, is sunk by a German U-boat (in a scene inspired by the real-life sinking of the Lusitania in 1915). It’s out of the frying pan and into the fire, as Angela survives her ordeal and arrives at her inherited chateau, only to learn that it’s about to invaded by Prussian soldiers looking for “old wine and young girls.”

* Modern audiences will likely scratch their heads when Karl teaches a little boy the proper marching technique (“I’ll show you the German ‘goose-step,’ Bobby.”), and he’s joined by Angela. 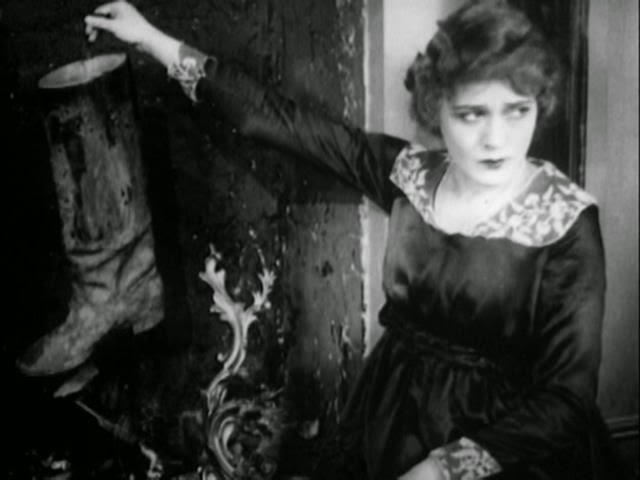 After a somewhat lackluster first half, The Little American really picks up the pace. The action is brisk, the tension more palpable, as Angela becomes entwined in the war. Once the Prussian soldiers have invaded, she witnesses the violation of her maids, and is subjected to being little more than a servant in her own home (in one scene, she’s reduced to removing the boots of Karl’s commanding officer). It gradually dawns on Angela that her neutral status doesn’t provide a shield from the horrors of war, and her only recourse is to help spy for the French. 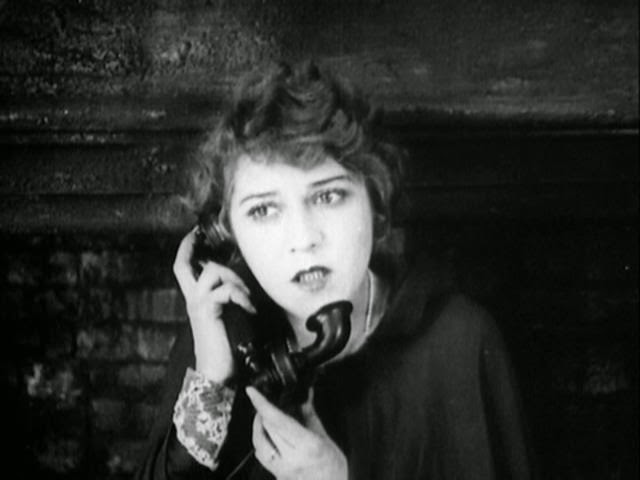 Compared to Angela’s defiant nature, Karl is weak. Ever the obedient soldier, he reluctantly toasts the sinking of the Veritania, but his biggest offense is yet to come. When he and his fellow troops invade the chateau, Karl almost rapes Angela before he catches his mistake. This sends a mixed message about his character, as if her apparent death would have excused his behavior (I almost expected Angela to tell him, “You didn’t know I was alive, so I guess I can forgive you.”). Any good that he does in the film is a direct result of her influence. At one point she challenges him: “Somewhere in this house there must be a man who is something more than a splendidly drilled beast.” When he catches her using a hidden telephone to reveal the location of German artillery, he’s frozen with indecision. By the time he makes his speech about dying free, it rings hollow. She has already risked everything to uphold her ideals. In contrast to Karl, Jules’ actions seem more heroic and honorable. When Jules loses his arm in battle, he’s back on the front lines fighting the good fight. Even though Angela has made her choice, Jules does what he can to secure Karl’s freedom after he’s captured by the French. It’s obvious she’s picked the wrong guy, but alas, I suppose there’s no accounting for taste. 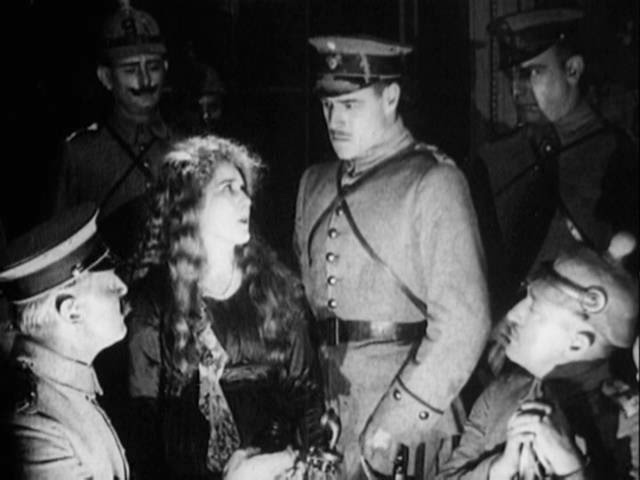 It’s easy to dismiss The Little American as an anti-German propaganda piece, designed to incite moral outrage and make the patriotic blood of American audiences boil, but that assessment would ignore an excellent performance by Pickford at the film’s core. Yes, the film is none too subtle, with lines like “…I stopped being neutral and became a human being,” but it’s effective nonetheless. When it’s Pickford who’s delivering the line, she sells every word.
Posted by Barry P. at 7:57 PM