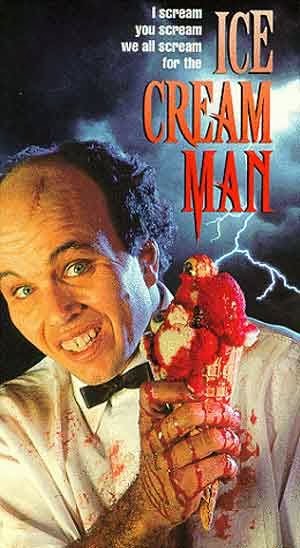 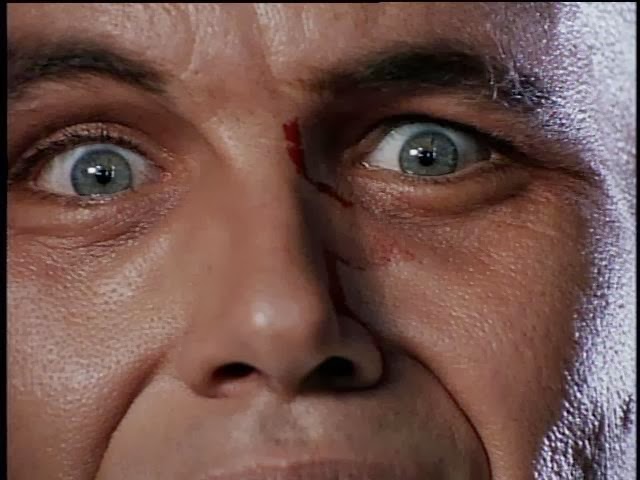 Somewhere between good and awful cinema lies a (ahem!) sweet spot where good bad movies dwell.  Today’s specimen is a prime example of such a flick – like the frozen confection in the title, nothing about it could possibly be good for you, but you’re compelled to consume it anyway.  Ice Cream Man is at once better than you’d expect, thanks to Clint Howard’s over-the-top performance, and just what you’d anticipate from a direct-to-video effort, replete with B-list actors, iffy production values, and a sloppy narrative. 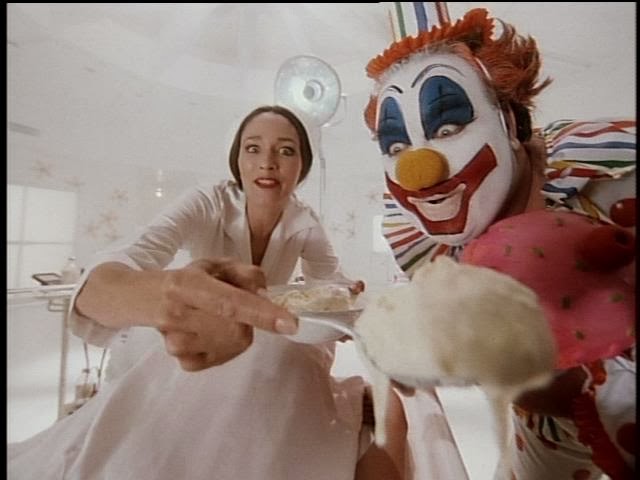 Poor Clint Howard.  With a few notable exceptions, he’s enjoyed scarce opportunities to be the headliner, typically being relegated to some bit parts in Roger Corman films or having a bone thrown his way by his brother Ron.  On the other hand, Clint has always managed to compensate for his relative lack of screen time with a memorable presence (for my money, he’ll always be fondly remembered as the diminutive Balok from the classic Star Trek episode “The Corbomite Maneuver”).  Any time he’s had the opportunity to become the lead is cause for celebration.  In fact, Howard is the only reason to see this movie.  He plays the deranged, gravel-voiced* titular character as if it were his birthright.  After his release from a mental institution, the Ice Cream Man makes it his mission to spread his own version of cheer, driving a shabby, vermin infested truck through a suburban neighborhood.  Unlike his peers, however, he believes in including a little something extra, incorporating body parts in his frozen treats like a latter-day Sweeney Todd.  Howard puts his all into the role, and obviously had a great time as the deranged ice cream vendor.  The scenes without Howard suffer by comparison, failing to convey the same level of maniacal energy.  While waiting for his next appearance you might be better off occupying your time with some other activity, such as washing dishes, clipping your nails, or brushing your dog/cat (you get the picture).


* In order to obtain the desired vocal properties, Howard would roll the car windows up during his 20-minute drive to the shoot, and scream at the top of his lungs (TNTMonstervision appearance). 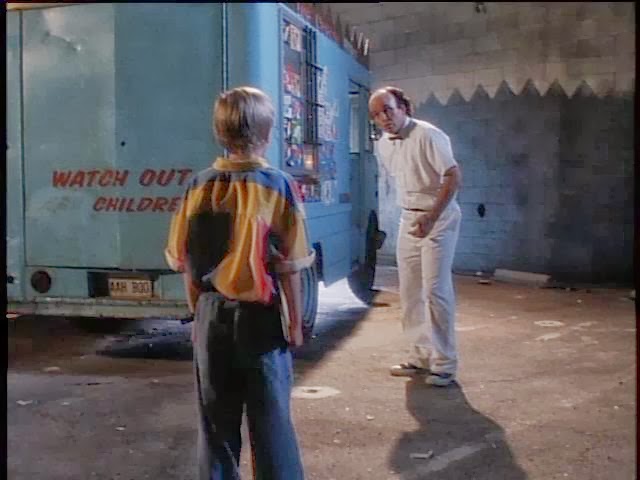 Compared to Howard, everyone else seems to be acting in an alternate dimension.  The plot, such as it is, revolves around a group of spunky neighborhood kids who are determined to reveal the Ice Cream Man’s true nature.  I can’t help but think this was  the filmmakers’ attempt to create a Goonies/Monster Squad vibe, but it all comes off half-assed, thanks to the child actors’* bland performances.  One aspect that doesn’t disappoint with regard to the supporting players is the impressive array of has-beens,** including Jan-Michael Vincent, David Warner, Olivia Hussey and David Naughton.  Warner, ever the consummate professional, does his best to convince us we’re watching a quality production, lending a disproportionate level of dignity and gravitas to his role as a town minister.


* One of the film’s oddest choices involves a token fat kid named Tuna (JoJo Adams), which isn’t strange by itself, unless you consider that the actor was clearly wearing baggy clothing stuffed with padding to simulate being overweight.  This begs the question: Were the filmmakers incapable of finding an actual portly actor for the role?


** Fans of 80s TV staple The People’s Court should keep their eyes peeled for a cameo by Doug Llewelyn as a grocery store manager. 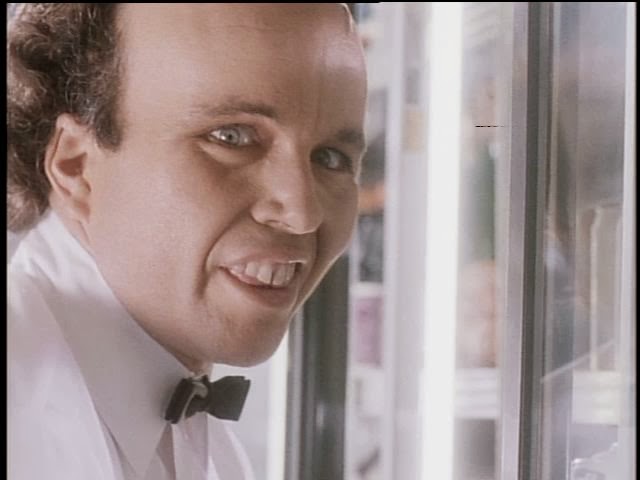 Despite the prologue at the beginning of the movie, where a pre-teen Ice Cream Man witnesses his mentor’s murder, writers David Dobkin and Sven Davison never adequately explain how or why he became homicidal. Throughout the film, his motives for killing remain vague and inconsistent.  Granted, no one’s going to watch a movie about a murderous ice cream man for logic or consistency, but it would have been a nice touch.  Instead, we’re left with a flimsy setup for the main character to kill people off in bizarre ways.  Admittedly herein reside some of the film’s dubious charms (Spoilers Ahead!).  Highlights include: the Ice Cream Man serving a scoop of rocky road with eyeballs for marshmallows; killing a local trollop, and adding her to his latest flavor (all that remains are a few pieces of jewelry and a diaphragm); and the pièce de résistance, a stupid but inspired shot of David Naughton’s head on a waffle cone. 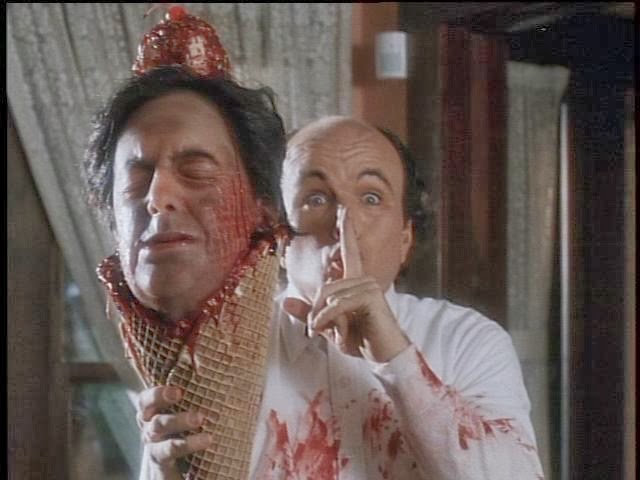 According to IMDB, Ice Cream Man was director Norman Apstein’s (aka: Paul Norman) only non porn flick (in this case, the “money shots” are deaths).  Like many cult movies, the final result is a mixed bag that will tickle some and annoy others.  It’s good for a laugh or two, but the scenes without Howard drag.  Rest assured, Howard did his best to deliver on the film’s premise, even if the rest of the flick is lackluster by comparison.  I’m not a big proponent of watching movies (or doing much else) while inebriated, but in this case, it could only help with the slow spots.  Watch responsibly.
Posted by Barry P. at 7:23 PM