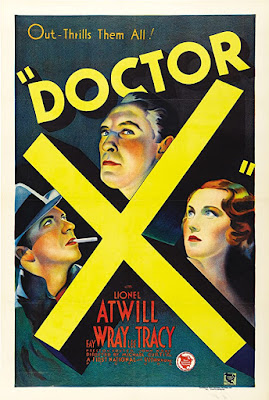 “Dr. Xavier is still working on his theory that strong mental repressions, phobias hidden in the darkest corners of the subconscious mind, can be brought to the surface and made to register through certain reactions of the heart. Am I correct, professor?” – Dr. Wells (Preston Foster) 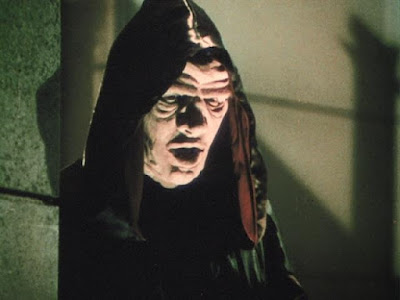 Although Universal was the undisputed leader in horror in the 1930s, it wasn’t the only game in town. Hollywood rival First National had something up its sleeve, with Doctor X, filmed in “Two-Strip” Technicolor, an expensive*/** early color process that combined red and green film strips to create a color image. To today’s viewers, the film has a surreal, otherworldly appearance, resembling something from a comic book or a dream state.*** The screenplay was derived from a 1930 stage production, which originated from an unproduced 1928 play, Terror. The film version was initially conceived as a horror vehicle starring Bela Lugosi, but First National eventually changed its tune, deciding to produce a mystery/thriller with comic overtones. Prolific director Michael Curtiz filmed Doctor X over a grueling 20-day schedule, requiring 15 to 20-hour days.

** Fun Fact #2: Doctor X was simultaneously filmed in color and black and white. The black and white prints, which included different takes from the color version, were intended for international release.

*** Fun Fact #3: Due to the limitations of the film process, blues, purples, or yellows could not be accurately duplicated. See the EastmanMuseum website for more details. 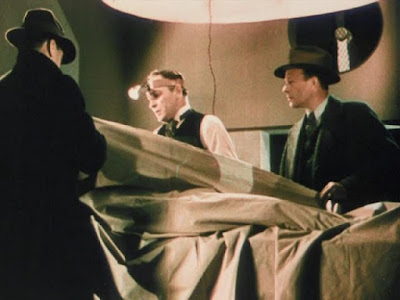 After a series of murders near a medical school run by Dr. Jerry Xavier (Lionel Atwill), the police have set their sights on the school’s staff. Further signs point to Xavier’s school when Xavier’s examination of a victim’s body reveals an incision that appears to have been perpetrated with a precision scalpel. Adding to the mystery, he discovers that a sizable chunk has been cut out of the body, suggesting cannibalism. Concerned about the potential bad press that the investigation will cause, Dr. Xavier resolves to mitigate the scrutiny by conducting his own investigation, using scientific methods. Unfortunately for the good doctor, things are not as hush, hush as he intended, on account of a snooping reporter, Lee Taylor (Lee Tracy). 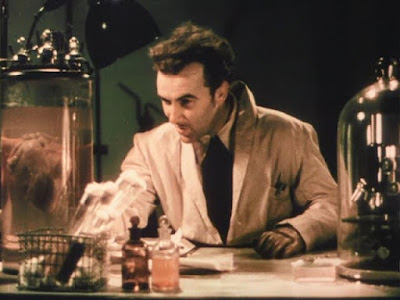 We’re introduced to the eccentric suspects, all researchers employed by Dr. Xavier. One-armed Dr. Wells (Preston Foster) conducts research on reanimation of body parts, and is also an ardent student of cannibalistic practices. Dr. Haines (John Wray) studies brain grafting, and has a fondness for erotica (the filmmakers were careful to tiptoe around the censors, by avoiding too many details). Dr. Rowitz (Arthur Edmund Carewe) researches the moon’s effects on the mind. Both Haines and Rowitz were involved in a shipwreck, where a third survivor vanished under mysterious circumstances (Could it have been…cannibalism?). Dr. Duke (Harry Beresford), the fourth researcher, is confined to a wheelchair, appearing the least likely to have perpetrated the murders. Dr. Xavier puts his plan into action, in an overly elaborate scheme to ferret out the killer. In what seems an awful long way to go on such short notice, the suspects are subjected to a re-enactment of the murders at his spooky cliffside mansion (under the full moon), with wax figures and live actors. Meanwhile, the suspects are confined to chairs connected to special equipment designed to measure their physiological response (Don’t hurt your brain trying to determine the science behind this experiment). 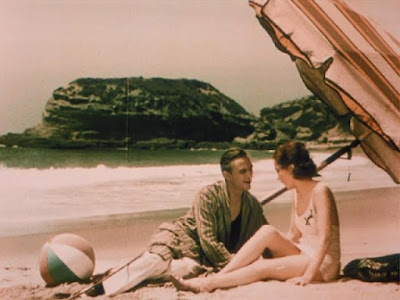 Doctor X balances horror and comedy (emphasizing the comedy), with mixed results. Goofy, go-getting reporter Lee Taylor provides the lion’s share of the comic relief, with a little going a long way. He’s obnoxious and overbearing at every turn, wearing out his welcome long before we’ve reached the midpoint. Taylor has more on his mind than landing a juicy story when he falls for Xavier’s aloof daughter Joanne (Fay Wray, in an underwritten role). Perhaps the biggest stretch, in a film full of contrivances, is that Joanne eventually falls for him, as the script dictates. Much more effective is George Rosener’s* quirky/creepy performance as Dr. Xavier’s enthusiastic butler with a morbid streak, Otto. He enjoys tormenting Mamie the maid, played by Leila Bennett (it would be easy to see her contemporary, Una O’Connor, in the same role). She’s prone to bouts of hysteria, keeping a bottle of booze under her pillow to keep the demons at bay.

* Fun Fact #4: Roesener wrote the first draft of the screenplay, which was mostly discarded. 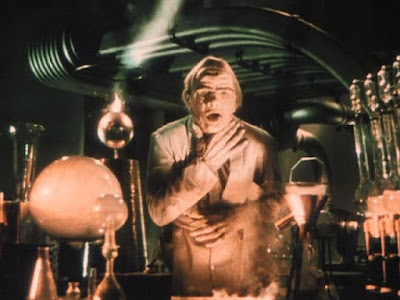 A humorous scene, applied with care, can help defuse tension in horror. In this case, however, less comedy would have been an asset. The film betrays its theatrical roots with scenes that are a bit too stagey and static. The basic whodunit story isn’t anything you haven’t seen before, but the morbid premise breathes new life into the proceedings, especially when the boogeyman is revealed in the climactic payoff. In the movie’s most distinctive scene (with makeup effects credited to Max Factor), the mad scientist undergoes a hideous transformation,* slathering on the clay-like artificial skin like a demonic Mummenschanz performer. It’s a scene that continues to mesmerize today, and likely caused a stir or two when it first played. Creaky plot elements and irritating characters notwithstanding, Doctor X remains a minor classic, a milestone in horror, and a must-see for any film fan.

* Fun Fact #5: According to the DVD commentary, British film censors deemed the transformation scene too horrifying, omitting it from prints at the time.

Note: Doctor X spawned a sequel, albeit in name only, The Return of Doctor X (1939), starring Humphrey Bogart, in a role he despised (but I quite enjoyed).