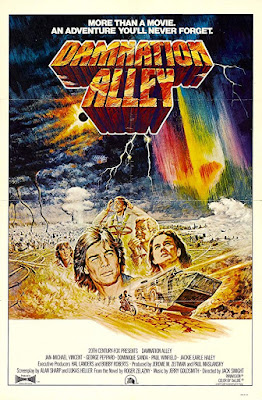 Rating: **½
“There used to be more of us, now there’s less. All the dead are dead, and the living are dying. That goes for you as well.” – Man (Robert Donner)

“How did I feel about it? Well, I felt we did the best we could with the technology that was available…But was I happy? I don’t think we realized the potential from the book in the script because of the problems involved, but today we could do it, and do it well.” – Jerome Zeitman (co-producer)

Post-apocalyptic movies share a strong relationship with road movies, where danger and discovery lie around every corner. The open road represents endless possibilities and the promise of freedom. The Mad Max films entrenched the post-apocalyptic road movie in filmgoers’ collective consciousness, but before Max Rockatansky tore down the highway in his V8 Interceptor, Denton and Tanner traversed the dusty, peril-strewn road known as “Damnation Alley” in their Landmaster. For their adaptation, screenwriters Lukas Heller and Alan Sharp did away with much of Roger Zelazny’s anti-establishment novella, while retaining the basic concept of driving across a transformed American landscape.

Damnation Alley begins on a somber note, with global thermonuclear war. A large portion of enemy missiles, presumably from the U.S.S.R., are destroyed, but not enough to prevent most of the United States from becoming a wasteland. The opposing country is dealt an equally devastating blow, with the combined atomic explosions knocking the Earth off its axis. The planet plunges into climactic upheaval, with massive changes to the weather and large areas left uninhabitable. A California missile base manages to avoid obliteration, along with its staff, and for a time they continue to maintain the semblance of normalcy. When the base is destroyed in an accident, the survivors set off toward Albany, New York, where life might still exist.

Unlike the original story, which placed nihilistic antihero Tanner front and center, the film focuses on two leads, Tanner* (Jan Michael Vincent) and Denton (George Peppard). Compared to his literary counterpart, Tanner is toned down considerably. Instead of an anti-establishment criminal with oppositional defiant disorder, Tanner is presented as a former Air Force officer, who has a problem with taking orders. The character in the original story was an antihero, living outside society’s norms, with a violent and sadistic streak. He only accepts the mission because he’ll be granted a pardon from his crimes (much closer to Snake Plissken in John Carpenter’s 1981 film, Escape from New York).
Denton (George Peppard) is given a much more prominent role in the movie. He appears briefly in the original story, to present the stakes to Tanner, but quickly steps aside. In the cinematic version, it’s Denton who stays in charge. The screenplay adds additional characters to the mix. The most notable addition is Paul Winfield as Keegan. Like Tanner, military life doesn’t quite suit him. He’s an artist at heart, and the most likable character of the bunch. Along their journey, they’re joined by Janice (Dominque Sanda), a would-be Las Vegas lounge singer, and Billy (Jackie Earle Haley), a scrappy orphaned teenager with a penchant for rock throwing.

Few would dispute that the real star of Damnation Alley is the hulking Landmaster all-terrain vehicle designed by Dean Jeffries. It’s built to dish out punishment as well as take it,* armed to the teeth with rockets and machine guns, and a unique configuration of four three-tire pods, to tackle the ever-changing topography. Although the Landmaster** doesn’t match the vehicle’s description in the book, it’s close enough to the point that any objections would seem like nitpicking.

* Another Fun Fact: Only one full-scale Landmaster was built for the film. According to producer Paul Maslansky, despite its rugged appearance, the vehicle wasn’t capable of traveling more than 10 miles without breaking down. It was also supposed to have amphibious capabilities, but Maslansky commented that it “sunk like a rock” in Flathead Lake in Kalispel, Montana, and had to be dragged out.

** Personal Note: I have fond memories of seeing the Landmaster parked next to the 101 freeway near Universal City, where it was a fixture for many years, before being sold to a collector.

The film falls short in its depiction of the mutant creatures Tanner and Denton encounter along the way. In one scene, Tanner evades giant scorpions while riding his dirtbike on sand dunes. Unfortunately, it’s all too easy to see the scorpions aren’t occupying the same three-dimensional space. Any tension from the scene is undermined by the arachnids’ transparent appearance, recalling the giant lobster scene from Teenagers from Outer Space (1959). Another pivotal scene with mutant creatures involved thousands of killer cockroaches. To the filmmakers’ credit, 300 Madagascar hissing cockroaches were imported. They were augmented, however, with 5-6,000 fake cockroaches, pulled along on a mat to appear as if they were attacking en masse.

The film’s plot follows a dubious course. In the original story, it’s a race against time because Tanner is transporting a vaccine that will eradicate a plague that’s ravaging Boston. In the film, Tanner and Denton are going to Albany, New York, to see if anyone’s left alive. Without the plague as a plot point, there’s no sense of urgency to reach Albany. (SPOILER ALERT) Adding to the script’s poor choices is the Polyanna ending, which suggests there are idyllic pockets of Americana left untouched by the cataclysm, and that the ruined climate would correct itself (contradicting a line of dialogue spoken by Billy earlier in the film).

In his commentary, co-producer Paul Maslansky admitted he didn’t read the book and didn’t care for science fiction in general (not exactly a good basis for overseeing the production). He also conceded that the results were a “B” effort, and the film could have been handled better today. Despite these concerns, Damnation Alley is a competent, if unremarkable film, featuring some decent performances, a few nice bits of dialogue, the aforementioned Landmaster, and a good score by Jerry Goldsmith. If you want to see the movie that Damnation Alley should have been, you’re better off watching Escape from New York. The original material begs for a remake, although the irony is that a more faithful adaptation might appear to those unfamiliar with Zelazny’s story, as a rip-off of John Carpenter’s film.
Posted by Barry P. at 1:15 AM