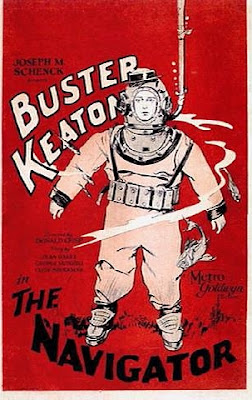 “Rollo Treadway – Heir to the Treadway fortune – a living proof that every family tree must have its sap.” – from title card, introducing Buster Keaton’s character. 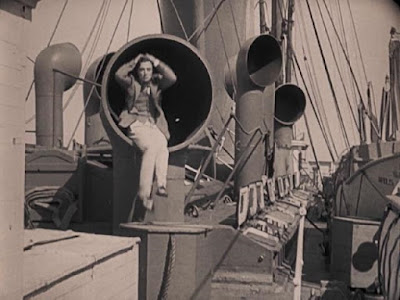 The ocean is as beautiful as it is mysterious, covering vast distances and concealing unimaginable dangers. If you’re Buster Keaton, it’s also a setting ripe for comic potential. With The Navigator, Keaton applied his fascination with boats and the water to his most ambitious film to date. The Navigator was shot primarily around Catalina Island (located off the California coast) and on a real ocean liner, the S.S. Buford,* which was fated for the scrap heap. For the purposes of the film, the ship was re-painted and dressed up as the S.S. Navigator. Underwater repair scenes were filmed in Lake Tahoe, Nevada.**

* Not-So-Fun-Fact: Built in 1890, the Buford enjoyed a long career as a military transport and an ocean liner. In 1919, in one particularly sad chapter of the ship’s working life, it was used to deport political dissidents.

* Fun Fact #1: Because it was mating season for the resident fish, the normally clear Catalina waters were cloudy. Keaton and his crew tried shooting the underwater ship repair scene in the Riverside public swimming pool but were forced to consider another location after the bottom was damaged. According to the DVD commentary by Robert Arkus and Yair Solan, due to the near-freezing temperature of the water in Lake Tahoe, Keaton was forced to shoot his underwater scenes in 30-minute intervals. 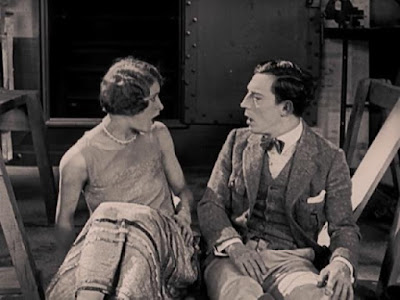 Tensions between two unspecified warring nations are at their peak when a millionaire sells his ship, The Navigator, to one side. Meanwhile, enemy agents from the other country plot to steal the Navigator and cast it adrift at sea. Enter scatterbrained heir Rollo Treadway (Buster Keaton), as he makes a spontaneous decision to get married (it goes about as well as you would expect), proposes to his sweetheart Betsy O'Brien (Kathryn McGuire), and is summarily shot down. Licking his wounds, he embarks on a solitary honeymoon, but unintentionally ends up on the Navigator. As fate would have it, the girl of his dreams also winds up on the wrong boat. Before long, they’re both alone at sea, with no crew or direction. In a case of the clueless leading the obtuse, the two spoiled rich kids must fend for themselves. 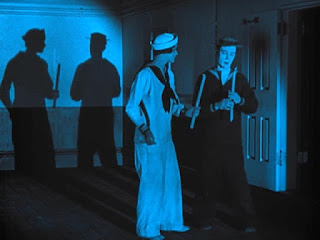 Keaton, in a similar role to the role he established in The Saphead (1920) and continued with Battling Butler (1926), plays a poor little rich kid bereft of common sense. Early in the film, Rollo struggles in the ship’s galley to cook a basic meal for Betsy. Ineptitude gives way to ingenuity, however, as they work together to make conditions on the empty ship livable. Betsy follows a similar trajectory, maturing from a pampered socialite to a self-reliant woman. 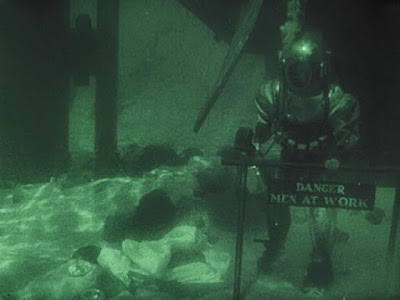 Co-director/star/producer Keaton and co-director Donald Crisp* didn’t quite synch creatively. Crisp, who was originally hired to film the dramatic sequences, took a keen interest in the comedic scenes, much to Keaton’s chagrin. Keaton was unhappy with Crisp’s footage, and ultimately re-shot some of the co-director’s scenes to meet his aesthetic. It’s hard to gauge how different The Navigator might have been without Keaton’s tinkering, but it’s difficult to deny how well the comedic scenes work. When the ship takes on water, Rollo plunges into the ocean’s depths to repair the damage. The underwater gags including sparring with a swordfish, using another swordfish, and using a lobster as shears. The watery scene was originally longer, until one sequence, Keaton’s favorite, was excised from the final film** after it failed to get the laughs he expected from preview audiences. One of the best, most elaborately choreographed sequences occurs earlier in the film, when Rollo and Betsy first arrive on the Navigator. In an inspired wide shot, they race around the decks occupying opposing corners of the ship’s superstructure – an apt metaphor for their voyage, going nowhere fast. In another terrific gag, Rollo attempts to tow the ship with a rowboat. On a different, sour note, the film does no favors for cultural sensitivity, as Rollo and Betsy encounter a tribe of cannibals (led by pioneering African American actor/filmmaker Noble Johnson), generic indigenous people with no discernible culture. The cannibal mayhem does, however, set up another clever gag, in which Betsy escapes using Rollo (inside the diving suit) as a raft (a scene that was copied in Woody Allen’s 1973 film Sleeper). Keaton pulls off the physical gags with such grace and aplomb, it’s easy to lose sight of the fact that he’s risking life and limb for the audience’s amusement, whether he’s hanging off a rickety ladder or diving in a 200-pound suit.

* Fun Fact #2: Crisp appears in a sight gag as a portrait of the ship’s grim-faced captain.

** Fun Fact #3: In the gag, as described, Keaton becomes an impromptu traffic cop for a school of fish, using a starfish as a badge. According to the DVD commentary, 1,200 rubber fish were used. The deleted gag enjoyed a second life, however, repurposed for the film’s trailer. Sadly, the cut footage appears to have been lost. 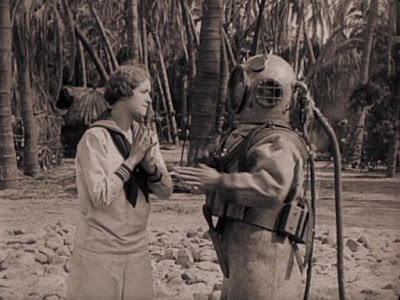 All of Rollo and and Betsy’s efforts seem all for naught by the film's climax. The ending, if edited differently could have become a tragedy, if our protagonists were not saved by the final deus ex machina intervention. We can excuse the ending in this case, which alas, is nothing but a final gag. Reportedly, famous surrealist Salvador Dalí was an ardent fan of The Navigator. One can imagine Dalí, captivated by Keaton’s off-kilter sensibility. By extension, it’s not too difficult speculate that these same pratfalls and absurd underwater hijinks provided inspiration for Warner Bros. cartoons. When slick effects and stunt doubles have become the norm, it’s easy to forget that Keaton and his contemporaries suffered for their art. This knowledge only makes the comedic journey more satisfying.