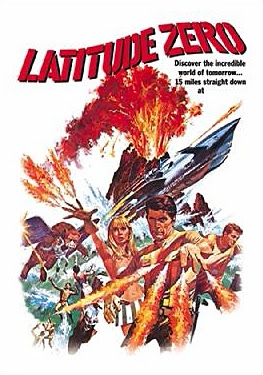 Dr. Malic (Cesar Romero): “No, I’m a genius. If you continue to be obstinate, Dr. Okada, you’ll force me to get the formula in my own way, by surgically removing your brain and dissecting its memory bank.”

It’s an honor and privilege to participate in the latest round of The Great Villain Blogathon, hosted by the blogging triple threat, Kristina of Speakeasy, Ruth of Silver Screenings and Karen of Shadows & Satin. Be sure to check out all the wonderful entries, exploring why it’s so good to be bad.

Some movies are destined to become classics (insert your favorite title here) because of timeless themes, relatable characters, or indelible images. Others, by accident or design, become lost to time. Latitude Zero falls into neither of these categories. It endures, residing in an undervalued but vital category of film, as cinematic junk food. Sometimes we only want a fun way to spend 90 or so minutes, no hidden messages, no strings attached.

On the surface, Latitude Zero looks like a direct descendent from Honda’s Atragon (1963), with similar story elements, including a super sub and an undersea kingdom. The film’s roots go back another couple of decades, however, from a 1941 American radio serial by screenwriter Ted Sherdeman. The film was shot entirely in English from an English-language script by Sherdeman, with a combination of Japanese and American actors. Friction between American producer Warren Lewis and the Japanese crew led to some oil and water dynamics on the set. According to Honda biographers Steve Ryfle and Ed Godziszewski, Lewis initially assumed that the Japanese filmmakers were incompetent, insisting on Honda shooting with three cameras, instead of one, which was typical for Japanese productions. Only after Honda demonstrated how it was more efficient to work with one camera, did Lewis relent and allow the director to shoot the film as he intended.

* On a side note, it’s interesting to point out that Latitude Zero wasn’t the only movie from 1969 to feature an advanced underwater civilization. Compared to the lunacy on display in Honda’s film, Captain Nemo and the Underwater City (reviewed in an upcoming post) is downright conventional.

Latitude Zero features more characters with “doctor” in their respective titles than a medical drama. Two deep sea researchers, Drs. Ken Tashiro and Jules Masson (Akira Takarada and Masumi Okada) and Perry Lawton (Richard Jaeckel), an American journalist, descend in a bathysphere in the South Pacific. Their mission to observe and record the “Cromwell Current” (which could potentially be utilized by submarines as a means to increase speed) is jeopardized after a volcano erupts. They’re rescued by Captain Craig McKenzie (Joseph Cotten) and his submarine Alpha, which whisks them to Latitude Zero, a futuristic undersea city hidden from the prying eyes of world governments. We learn that the utopian society has perpetrated an ongoing conspiracy, in which some of the world’s best scientists have faked their own deaths to join Latitude Zero’s team of researchers. Things heat up when McKenzie’s archnemesis Dr. Malic (Cesar Romero) kidnaps Dr. Okada (Tetsu Nakamura), a Japanese scientist bound for Latitude Zero.

If Cotten seemed to be phoning in his performance, Romero was in top, hammy form as Malic.* Fresh off his stint as the Joker on the Batman TV series, Romero is at his sneering best as the mad scientist with a taste for revenge. Along with his diabolical companion Lucretia (played by Cotten’s real-life wife, Patricia Medina), he plots McKenzie’s demise and the destruction of the Alpha. What’s his beef? No idea (He’s evil, get it? Evil!). He resides in his remote island fortress, Blood Rock, protected by an army of mutant rats and bat people. Of course, every villain worth his sea salt has to have a good henchman (in this case, henchwoman), and Kroiga (Hikaru Kuroki) proves to be up to the task, with her black leather dress and riding crop. She commands the sleek attack submarine The Black Shark (well, it’s more of a dark gray), barking orders such as, “Top speed. Ram it!” Malic’s crowning achievement is a beast of his own creation – after grafting the wings of a condor onto a lion (okay, a man in a lion suit), he implants the brain of Kroiga into the lion, and increases its size three-fold. For some reason, Malic believes the creature will obey his commands, which seems dubious, considering this was the same henchwoman he betrayed in a previous scene.

Perhaps the hardest pill to swallow in this super-advanced society is the gallery of atrocious fashions on display. McKenzie is one of the biggest offenders, sporting an open-front white tunic with gold trim and a lime green ascot. McKenzie defends his surgeon Dr. Anne Barton’s (Linda Haynes) appearance to the disbelieving journalist, “Mr. Lawton, what’s a doctor supposed to look like?” It’s too bad his comment and the film’s quasi-progressive stance are undermined by her outfit. With her bikini top, miniskirt and thigh-high go-go boots, Dr. Barton would be more at home dancing in a cage than working in an operating theater. Then again, that’s how they roll in Latitude Zero.

Maintaining a healthy suspension of disbelief is the key to enjoying Latitude Zero. Because of the advanced state of medicine in the underwater civilization, living to a hyper-advanced age is the norm. McKenzie and Malic, we discover, are 204 and 203, respectively, and the submarine Alpha was constructed in 1805.* Suspension of disbelief only takes you so far, with a plot contrivance that sounds like it was cooked up by a seven-year-old on a playground. Before McKenzie launches his assault on Malic’s lair, our would-be heroes bathe in a “bath of immunity,” which renders them invulnerable for 24 hours. Add to this heat-resistant gold/platinum suits (that are somehow light and flexible) and gloves with flamethrowers and lasers, and you’ve pretty much eliminated any suspense about whether or not they’d make it out alive. I almost expected Malic to whine, “No fair!” And who’d blame him?

The Wizard of Oz-style ending is just icing on a bizarre cake that will probably leave you looking for the Scarecrow and Tin Man (Hey, they already have a lion, the bat people vaguely resemble flying monkeys, and Lucretia is sort of witchy, so why not?). There are so many odd plot elements that come out of left field, that it’s easy to see how this would have worked as a television series, complete with cliffhangers. If good acting, believable story and universal themes are your thing, then steer far away. But as Willy Wonka once proclaimed, “A little nonsense now and then is relished by the wisest men.” Who can argue with that?

Source for this review: Ishiro Honda: A Life in Film, From Godzilla to Kurosawa, by Steve Ryfle and Ed Godziszewski, with Yuuko Honda-Yun
Posted by Barry P. at 10:59 PM