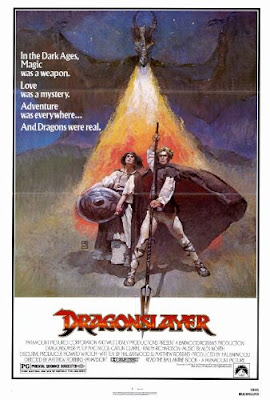 “Oh, I know this creature of yours – Vermithrax Pejorative. Look at these scales, these ridges. When a dragon gets this old, it knows nothing but pain, constant pain. It grows decrepit, crippled, pitiful, spiteful.” – Ulrich (Ralph Richardson)

Sword & Sorcery Month begins with a favorite from my formative years, the Paramount/Disney co-production, Dragonslayer. Don’t let the Disney connection fool you, though. This early ‘80s PG-rated film contains surprising amounts of gore and a brief flash of nudity, so if you’re looking for that sort of thing, I’ve got you covered. The main attractions, however, are the spectacular effects (more on this in a moment).  Dragonslayer was directed and co-written by Matthew Robbins, whose previous film was Corvette Summer (1978), and decades later would go on to collaborate with Guillermo del Toro.

Dragonslayer introduces some fresh faces (circa 1981), including Galen (Peter MacNicol), a sorcerer’s apprentice, and Valerian (Caitlin Clarke)* a young woman pretending to be a teenage boy. Valerian appeals to Galen’s master, Ulrich (Ralph Richardson) to help their village, besieged by a malevolent beast. When Ulrich suddenly perishes, the apprentice must pick up where the sorcerer left off. His early demise serves as a reminder that it’s Galen’s story. Richardson portrays Ulrich not as an all-powerful wizard but a flawed, world-weary man who’s seen a few too many seasons. His humor and grace contrasts Galen’s awkward, ersatz cockiness.

* Fun Fact #1: This film marks the first feature roles for MacNicol and Clarke.

The story’s true villain is mendacious, unprincipled King Casiodorus Rex (Peter Eyre), who has negotiated an uneasy peace with a murderous dragon, at the expense of the villagers’ virgin daughters (How anyone negotiated with a dragon in the first place is anyone’s guess). The kingdom maintains a lottery, created by Casiodorus, in which said virgins are offered for sacrifice. And while we’re on the subject of sacrifice, why virgins? If the villagers offered a non-virgin, would it give the dragon indigestion? We’re reminded that wealth has its privileges, as Casiodorus keeps his daughter out of the lottery. His fear of the dragon overwhelms his hatred, and he bristles at the prospect of anyone tampering with the balance of power. In one scene, the king tells Galen about an incident, long ago, when his brother set out to do battle with the dragon, only to vanish without a trace. The only lesson he seems to have learned is that being noble and brave doesn’t get you very far in life.

Our hero is plucky and exuberant enough, albeit a bit on the scrawny side, compared to his contemporaries. As my youngest kid pointed out, “he looks like he’d be stuffed in a locker.” Of course, Galen’s depiction follows one of the familiar fantasy tropes, in which our protagonist typically goes one of two ways: either a hulking hero (e.g., Conan) or a diminutive protagonist, who favors his wits above brawn. There’s no middle ground. Setting up Galen as the nominal hero, however, is a missed opportunity to let Valerian shine. It’s disappointing that once her secret’s out, she takes a back seat to Galen. No offense intended to MacNicol or his character, but Galen is kind of vanilla in comparison. Valerian’s subterfuge adds another dimension to her character, which leaves more questions. Her father successfully avoided the lottery for years by passing his daughter as a son. When Valerian’s identity is revealed, you would think there would be some resentment from his fellow villagers that she was spared, but it’s only addressed briefly in an exchange with a fellow villager, who seems to shrug it off. It’s doubtful that other parents who lost daughters, or women who survived the lottery felt the same way. Our only indication is through Valerian, who appears conflicted about the choices she had to make, and the consequences. I also wonder, what would happen if she continued to assume a leadership role in her male-dominated community? Instead (Spoiler Alert), the writers take the easy route in the end, as she and Galen set off for greener pastures.

Few would argue that Dragonslayer’s biggest raison d'être is the eponymous, fire-breathing beast (aka: Vermithrax Pejorative*). The dragon is appropriately big and scary, but also full of expression. In a post-modern spin on the evil dragon trope, the film elicits pathos for a creature that’s past its prime, and lost everything it’s held dear. The filmmakers deliver the goods, employing every visual trick at their disposal and creating some new ones for good measure, thanks to Lucasfilm’s Industrial Light & Magic (ILM) effects team, led by Dennis Muren. Despite many subsequent advances in effects technology, particularly in CGI, most of the effects have held up very well. In addition to a full-scale animatronic creature (built by Brian Johnson at Walt Disney Studios), the filmmakers utilized 15 other dragon models for various poses. Muren’s team developed an evolution of stop-motion animation, called Go-Motion, supervised by Phil Tippett, which relied on a dragon puppet with computer-controlled rods. The Go-Motion process resulted in an image that contained intentional blurring to create a more fluid, lifelike action, rather than the jerky movement inherent in stop-motion animation. (Source: Industrial Light & Magic – The Art of Special Effects, by Thomas G. Smith)

* Fun Fact #2: According to one source, the dragon’s name means, roughly translated from Latin, “The Worm of Thrace Who Makes Things Worse." (source: “The Vermithrax Pejorative Story: Behind the Scenes at the Making of Dragonslayer,” by M. Ronan, Weird Worlds, 1981)

** Fun Fact #3: 1981 was a competitive year for the Academy Award in special effects, with Dragonslayer losing out to another ILM effects project, Raiders of the Lost Ark.

Dragonslayer is a pastiche of familiar elements with a flair for spectacle. While the story might not hold up under intense scrutiny, the film is a good introduction to the genre, and a solid entry in the glut of early ‘80s sword and sorcery flicks. Paramount isn’t known for including heaps of DVD extras, but a trailer, “making of” featurette or commentary track would have been nice. We can only hope that a decent Blu-ray edition is in the works before too long. At the end of the day, Dragonslayer might be lauded more for its technical achievements than its originality, but it sure is fun to regress back to a simpler age, when mythical beasts terrorized the land.
Posted by Barry P. at 9:41 PM