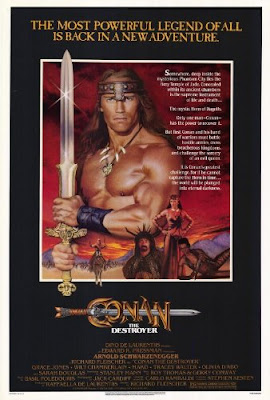 “It’s like being a little kid again, in many ways, and doing the things that maybe you were not allowed to do as a kid, you know, stabbing people with a sword and killing them with an axe, and stuff like that. And in the same time, acting-wise, it is kind of challenging… so there’s these two opposites.” – Arnold Schwarzenegger (from 1984 interview, unknown TV program)

I’m sure some of us can relate to having an older sibling that gets all the attention and glory, while we’re relegated to linger under his or her shadow. There are different ways we can choose to handle this: wallow in resentment and a crushing sense of inferiority, or opt for the higher road. Conan the Destroyer is that kind of younger sibling. After Conan the Barbarian debuted, it set the standard for big- and small-budgeted sword and sorcery productions. Expectations were high (perhaps unreasonably so) for the sequel. When the titular character, played by Arnold Schwarzenegger, returned in a PG-rated, (mostly) family-friendly adventure, reception was lukewarm. Was this a kinder, gentler barbarian for a new era? Not quite, thanks to a high body count (including a decapitation and geysers of blood), but the general perception was that this was little more than a toned-down imitation of a Conan movie. Is the film’s reputation as the underachieving younger sibling deserved? Read on…

The story more or less picks up where the first movie left off, with Conan wandering the wastelands, searching for riches. He’s no closer to acquiring his own kingdom, as hinted by the first film’s conclusion. Instead, he’s taken companionship with Malak, a thief (Tracey Walter). Their backstory is never elaborated upon (How he met Conan, or why Conan would allow him to tag along remains a mystery). After they have a run-in with Queen Taramis (Sarah Douglas)* and her soldiers, Conan is presented with a proposition. Taramis promises him he will be reunited with his true love, Valeria (who met her untimely demise in the first film),** if he’ll help her obtain the coveted Horn of Dagoth.  He’s accompanied on his quest by Malak, the wizard Akiro (Mako, resuming his role from the original film), the young Princess Jehnna (Olivia D’Abo), and her towering guard Bombaata (played by basketball star Wilt Chamberlain).

* Fun Fact #1: As originally filmed, Douglas’ character was more overtly sexual in her efforts to persuade Conan. In her description of the deleted footage: “It was the movie’s hottest scene…I kept my crown on and he kept his sword on, and I made all these jokes about hilts. Then, near the film’s end, I seduce the stone statue, Dagoth. I stroked it into life. Very hot little scene, that was.” (from “Sarah Douglas – No Rest for the Wicked,” by Brian Lowry, Starlog, October 1986)

** If your BS detector is going off around now, then congratulations.

Schwarzenegger is appropriately charismatic and imposing in his sophomore outing as Conan. Without question, however, the film’s highlight is model/singer/maverick Grace Jones, in an early film role, as the laconic warrior Zula. On several occasions, she steals the show from Schwarzenegger, with little more than a well-timed facial expression. Zula’s unbridled, feral* energy screams “don’t screw with me.” Anyone who dares to tangle with her are sorry they did. Another relatively new face is former pro-basketball player Wilt Chamberlain. At 7’1”, he’s an impressive figure as Bombaata, towering over Schwarzenegger.** Conan the Destroyer also marked the first feature film role for D’Abo, who was only 14 at the time. The script doesn’t give her much to do, except act the damsel in distress, and serve as a pawn for Queen Taramis’ evil schemes. There’s a hint of bigger and better things, in a scene where Zula and Conan teach her to fight, but we never see a payoff.

* Fun Fact #2: In Jones’ words, “I really wanted to be an animal in this. I wanted a lot of animalism to come out of it…” (from 1984 Interview magazine article, “New Again: Grace Jones,” by Andy Warhol and André Leon Talley)

** Fun Fact #3: If you thought he looked small next to Chamberlain, Schwarzenegger is further dwarfed by wrestler Andre the Giant, who appears, in an uncredited performance, as the powerful beast Dagoth.

The word “underrated” gets thrown around quite liberally these days, to describe anything that was poorly received, but in this case it seems warranted. Conan the Destroyer deserves re-evaluation, not for what it lacks, but what it has. Veteran director Richard Fleischer, who made superior genre contributions including 20,000 Leagues Under the Sea (1954), Fantastic Voyage (1966), and Soylent Green (1973) knows his way around films with extraordinary settings. While Conan the Destroyer can’t quite measure up to these titles or its esteemed predecessor, it’s well worth a look. Enjoyed on its own merits (especially Jones’ off-the-rails performance), its lighthearted tone and emphasis on adventure, it’s a fun way to spend a rainy Saturday afternoon.
Posted by Barry P. at 11:23 PM