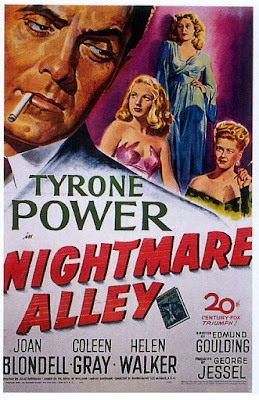 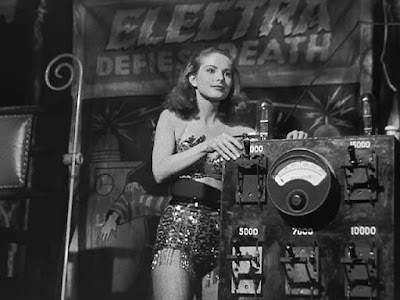 There are two things in movies that are almost guaranteed to hook me: I’m a sucker for movies with carnival sideshows and deep-sea exploration. Naturally, if there’s ever a movie with a deep-sea carnival sideshow, I’m in, but I digress. Nightmare Alley is set in the mysterious world of the sideshow. Beyond the sound of the carnival talker (please don’t call them a “barker”), the hyperbolic poster artwork, and shiny lights, there’s an air of desperation and failure. Nightmare Alley is about a man who shoots for the stars, only to end up on the ground. 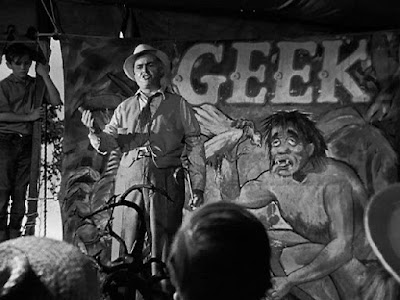 Jules Furthman (The Big Sleep) based his screenplay on a novel by William Lindsay Gresham, who studied the carnie world, and whose life paralleled the film’s main character. Charming con-man Stanton (“Stan”) Carlisle (Tyrone Power) befriends Zeena (Joan Blondell), a “mystic” who appears to read the minds of her audience members through an elaborate code, based on specific words and inflections. Stan picks up on the machinations of Zeena’s act, dreaming of going beyond the penny-ante sideshow and creating a show that will make some real money. After he learns Zeena’s code, he sets his sight on Molly (Coleen Gray), a pretty young performer who can serve as his assistant. Stan makes a name for himself with the nightclub crowd with his high-class adaptation of the carnie act, hooking in wealthy audiences with his ersatz mind-reading abilities. 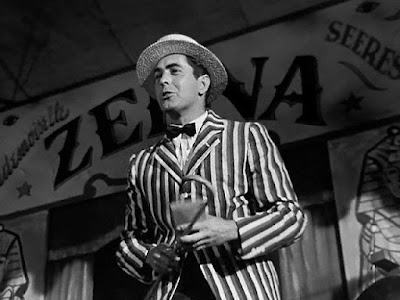 Tyrone Power, tired of playing the same romantic leads, chose the role of self-centered rogue Stanton Carlisle to break out of that predictable mold. In an early scene we see Stan’s true talent for sweet-talking his way out of a difficult situation, when a local sheriff wants to jail the members of the carnie troupe. Stan pulls him aside, convincing him he understands private details about his life and insecurities. To the uninitiated, such as the flabbergasted sheriff, he appears to possess psychic abilities. He uses his considerable charms to win over Zeena and Molly, and builds a successful nightclub act, but he’s haunted by the specter of failure. He’s wracked with guilt over the death of Zeena’s alcoholic husband (whom he encouraged to embark on a final binge), and unnerved by the anguished cries of the sideshow geek (used to good effect in a few key scenes). After his latest scheme fails, he takes a rapid plunge into alcoholism and self-pity. In the DVD commentary, James Ursini attributed some of Stan’s abilities to true ESP, but I don’t agree. Stan appears to be especially sensitive to reading subtle cues and highly intuitive, but that doesn’t necessarily predicate an innate paranormal ability. 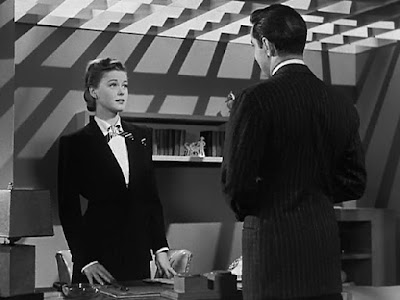 Helen Walker shines as the shrewd, enigmatic psychologist Lilith Ritter, who understands all too well “it takes one to catch one.” She identifies Stan’s game, and schemes how they can collaborate and profit from his skills. Her motives, however, remain unclear, as we begin to wonder who’s conning whom. The film takes a very cynical view of the psychological profession. Based on Helen’s unethical dealings, we’re left wondering if her practice may not be any more valid than Stan’s nightclub act. 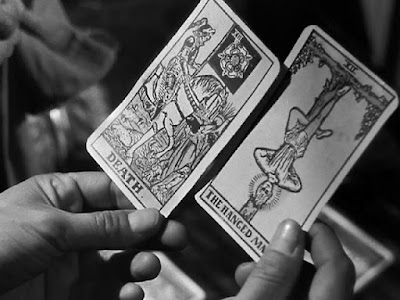 All along the way, we see the signposts of rough roads ahead for Stanton, but he doesn’t heed the warnings. It’s no fluke that our first introduction to the sideshow world in the film is through the Geek exhibit. The Geek is never more than a peripheral character, but his presence plays a major part, as a source of fear and fascination for Stanton. His musing about how someone could sink so low foreshadows his rapid, abrupt decline. Zeena’s tarot cards also serve as a harbinger of doom. She understands her clairvoyance act is no more than mere smoke and mirrors, but she believes in the power of her tarot cards, and what they foretell. She recalls when her husband Pete drew the “Death” and “Hangman” cards, which proved to be all too prescient. As the film progresses, and Stan’s ambitions exceed his grasp, he soon follows in Pete’s self-destructive footsteps. 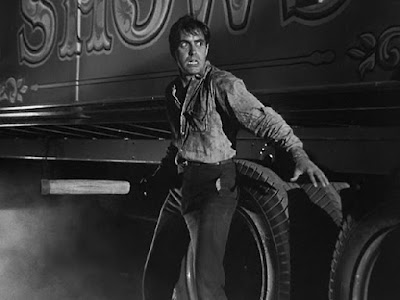 Stan Carlisle’s act is built on the premise of P.T. Barnum’s time-worn adage, “there’s a sucker born every minute.” His natural talent for perception and deception forms the basis for a lucrative act, but things take a dark turn when he escalates from an innocuous charlatan to a false prophet. The film was a bold departure for Tyrone Power, which proved too much for Fox studio head Darryl F. Zanuck to take. Zanuck insisted on a happy ending, which deviates from the book, but it does little to alleviate the uneasiness of the film’s climax, when Stan hits the bottom. By the film’s conclusion, Stan’s future is uncertain, with his life possibly damaged beyond repair. The promise of redemption, suggested by the supposedly upbeat ending, is a hollow one. As with so many films that were before their time, it took a while for popular opinion to catch up with Nightmare Alley’s status as a classic. It’s film noir at its darkest, a raw, unflinching portrayal of a man on a downward spiral.
Posted by Barry P. at 10:25 PM