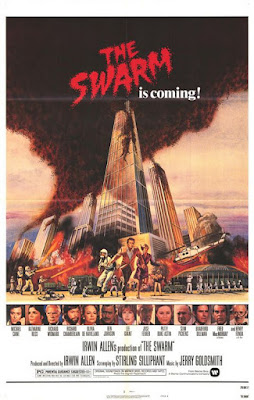 “We’ve been fighting a losing battle against the insects for 15 years, but I never thought I’d see the final face-off in my lifetime. And I never dreamed that it would turn out to be the bees. They’ve always been our friends.” – Dr. Brad Crane (Michael Caine)

Note: The following review references the international theatrical version. For a detailed comparison between the U.S. theatrical and international releases, see http://www.movie-censorship.com/report.php?ID=1496

When I started planning the Nature’s Fury Blogathon, there was little doubt about which filmmaker I wanted to cover, the so-called “master of disaster,” Irwin Allen. Producer/director Allen rode the wave of ‘70s natural disaster movies, creating two iconic examples, The Poseidon Adventure (1972) and The Towering Inferno (1974). Both films featured over-the-top destruction, impressive set pieces and an all-star cast in peril. His 1978 follow-up, The Swarm, based on a novel by Arthur Herzog III, and with a screenplay by Stirling Silliphant (who penned both previous films), copied the same winning formula, but something got lost in translation.

The Swarm tried to do for Marysville what Jaws did for Amity, featuring a community in the grip of forces beyond anyone’s reckoning. The small Texas town,* which looks suspiciously like part of Burbank Studios, is poised to celebrate its annual Flower Festival when a giant swarm of African killer bees decide to crash the party. Meanwhile, in the nearby desert (presumably the town is somewhere in the western region of the state), a crack team of Air Force operatives secure an ICBM base, in an effort to determine what caused the deaths of all personnel. Their leader, General Slater (Richard Widmark) is surprised to find an intrepid entomologist has already beaten them to the punch.

* Allen obviously couldn’t resist plugging another one of his movies. Watch for The Towering Inferno on a movie theater marquee.

Dr. Brad Crane (played by the normally reliable Michael Caine) is an expert on bees, and proponent of the theory that an aggressive African strain is about to invade the U.S. shores. He evokes the ire of the military brass when he’s appointed by the President to find a way to eradicate the stinging menace. Caine overacts to the hilt as the excitable entomologist, whose primary character traits are shouting and eating sunflower seeds. When he’s not yelling at Slater or running through Marysville like a madman, he enjoys a chaste, budding relationship with a young military M.D. (Katharine Ross). Crane teams with his friend, immunologist Dr. Walter Krim (Henry Fonda) to find an antidote to the lethal bee venom, which kills with three or four stings.

The Swarm follows the time-honored tradition of packing as many recognizable names into the film’s two hour-plus running span as possible, no matter how superficial or tenuous their characters might be to the central plot. Naturally, all of this casting* is an excuse for viewers to think: “Hey, there’s (insert esteemed celebrity name here)!”** Allen keeps so many plates spinning at one time that several are bound to crash, and crash they do. It’s commendable that the filmmakers wanted to focus on character development in an action-oriented movie, but most of the plot threads go nowhere. One key offender is a geriatric love triangle between an elementary school principal (Olivia De Havilland) and two suitors, played by Fred MacMurray and Ben Johnson. Who wins her heart? Well, let’s just say their dilemma is resolved in a way that only Irwin Allen could devise. Patty Duke Astin plays Rita, the pregnant wife of a soldier who died on the missile base. Out of the blue, her doctor makes his move on the new widow (Ethics, what ethics?). Another unsatisfying subplot involves Crane’s colleague/rival Dr. Hubbard (Richard Chamberlin). Their first scene together establishes they don’t care for each other, but it’s never made clear why they have such a contentious relationship.

* You have to give Mr. Allen kudos where it’s due, for employing 20 million bees in the making of this film. You might deduct a few points, however, since not a single bee gets a mention in the end credits.

The Swarm is full of over the top bee-induced shenanigans and head-scratching scenes. In one scene, Dr. Krim does the sensible thing and tests his experimental serum on himself (What could possibly go wrong?). The set designs seem lifted from other Irwin Allen productions, with lots of computer screens and blinking lights that apparently do nothing. I can’t help but wonder if this film inspired a young Michael Bay with its proliferation of explosions. With a little help from the bees, everything blows up with the slightest provocation: helicopters, cars, a derailed train, and a nuclear power plant. I don’t claim to be an expert on nuclear fission reactors, but I believe it takes more than a few thrown switches to cause a meltdown. When Dr. Hubbard visits with the power plant’s director, he questions: “In all your failsafe techniques, is there any provision against an attack by killer bees?” In a later scene, as Dr. Crane directs an aerial assault on the bees in the Houston area, we’re treated to a mountainous vista (Who knew?). The fun doesn’t stop there. Be sure to stick around for the end credits, which include a disclaimer about the African killer bees depicted in the film, in an effort to dispel attitudes about the “industrious, hard-working American honey bee” (presumably because they didn’t want to offend any domestic bees that might be watching).

Many faults aside, one of the pleasures of The Swarm is how deadpan everything is, lending to the unintentional comedy. You could probably turn this into a decent drinking game (example: take a swig every time Michael Caine gets into a shouting match with Richard Widmark, or when something explodes). Too bad it drags at times, no thanks to the longer international cut. In between the silliness, you spend a lot of time waiting for something to happen. If you hunger for 1970s disaster flicks, you might want to stick with a “quality” Irwin Allen production, such as The Poseidon Adventure or The Towering Inferno, but if you have a high tolerance for a canned cheese sandwich with a side order of tedium, The Swarm might just fit the bill.
Posted by Barry P. at 12:00 AM