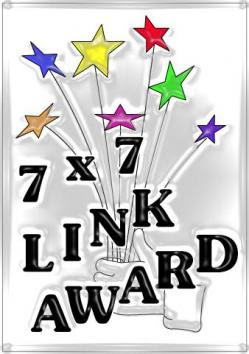 I’m a little late responding to last month’s nomination by Michaël Parent, purveyor of the eclectic and fascinating Le Mot du Cinephiliaque (Be sure to check out his blog, if you haven’t already!), but I wanted to express my sincere gratitude for bestowing this honor to me and my little blog.  In the true spirit of perpetuating the blog karma there are three rules that 7x7 Link Award recipients must follow: First, never expose them to sunlight; second, don’t give them any water, and… Oops!  Wrong rules.  Okay, here goes…

Tell everyone something that no one else knows about you:

I work at a university during the day and my educational background is in mental health, which explains my tendency to look for the psychological angle in films, particularly how they affect us consciously and unconsciously.  I truly feel that movies are a universal medium, a shared language that has the power to span geographic borders and superficial differences.  While modern researchers and even old Freud himself doubted the existence of catharsis, I tend to believe that great films are never a strictly passive experience, but a visceral one, enabling us to examine aspects of life from the inside out (I think you know where I stand on the catharsis issue).

My recent month-long retrospective on Japanese cinema wouldn’t have felt complete without a discussion of one of my all-time favorite directors: Hayao Miyazaki.  It was my love letter to Miyazaki-san, arguably the most consistent director living today, and his amazing body of work.

Last year, I examined the Amicus portmanteau films in the aptly named, Smörgåsbord of the Macabre: The Amicus Horror Anthologies.  Although the Amicus production team of Milton Subotsky and Max Rosenberg were responsible for many other films, this is what they will be remembered for, and what sets them apart from their rival Hammer.

Although it hasn’t garnered the most comments, 20,000 Leagues Under the Sea has far and away the most page views.  And why not?  It’s a bonafide classic that’s also one of my all-time favorites.  Its creators could never have anticipated how its Victorian industrial look would continue to influence steampunk enthusiasts for decades to come.

If you’re a blogger and you’ve got opinions (Hey, who doesn’t?), you always run the risk of alienating your readers.  It’s always a little daunting to go out on a limb and potentially trash someone else’s personal treasure.  One review can put you on someone’s favorite list or it can turn them off forever.

According to my site stats, Dr. Jekyll & Sister Hyde is my third most popular post – Not bad for a fairly obscure Hammer movie that’s been out of print (at least in the States) for several years now.  I was surprised to discover how enjoyable it was.  It did more than simply cash in on the time-worn premise of a mad scientist living dual lives, but existed as a shrewd examination of sexual politics.

These Are the Damned was another Hammer entry, and probably one of my biggest discoveries in recent years.  It’s a somber commentary on the cold war, and the ramifications of survival at any cost.  Unfortunately, the film and review haven’t seen much notice.  Nevertheless, you owe it to yourself to check out this neglected gem in the Hammer crown.

Pet Peeves About Pets was the little post that could.  It sat in unfinished form in my computer’s hard drive for about six months before I realized that the best person to speak up about the cinematic mistreatment of pets was another pet.  Fortunately for me, Lassie stepped in at the last minute to finish the post and save the day.  I think it might have spawned some controversy regarding whether or not she had a ghost writer, but I’m sworn to secrecy on the matter.

Here are seven blogs that continue to inspire me to work harder.  I realize that some of these bloggers have already won this award, but to borrow from the closing credits of Universal’s Frankenstein, “A good cast is worth repeating.”

Page at My Love of Old Hollywood documents a bygone era with an historian’s eye and a film lover’s soul, through a combination of pictures and captivating tidbits of trivia.

Ragnarok at the amusingly titled Cinemasochist Apocalypse entertains with his articulate dissertations on cinema’s overlooked and neglected stepchildren.

Hal at The Horn Section has been particularly notable for his ongoing exploration of movies that have not made it to DVD.

The diverse subject matter and insightful commentary by Chip Lary at Tips from Chip keeps me coming back for more.

The enigmatic Starmummy and his equally beguiling B Moviesand Beyond focuses on two subjects dear to my heart – horror and obscure gems.  He gets my vote for his rave review of X – The Unheard Music alone.

Dave J. Wilson at Cinematic Shocks is a great resource for horror fans, or someone just looking for their regular fix of depraved cinema.
Posted by Barry P. at 11:25 PM