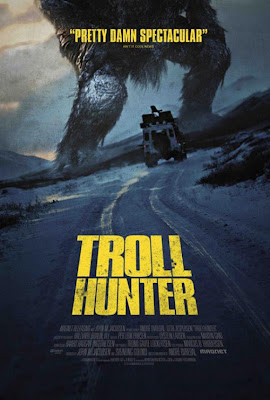 (2010) Directed by: André Øvredal; Written by André Øvredal and Håvard S. Johansen; Starring: Otto Jespersen, Glenn Erland Tosterud, Johanna Mørck, and Tomas Alf Larsen; Available on DVD, Blu Ray and Netflix Streaming
Rating: ****
TrollHunter is a Norwegian found footage movie that manages to do something new with the overcrowded genre.  Before you groan, “Oh no, not another found footage movie,” consider that director/co-writer André Øvredal has fashioned a unique film that transcends the viewer’s preconceptions and does more than simply present a change of scenery.
The film is presented in a pseudo-documentary format, allegedly culled from hundreds of hours of raw footage.  We are introduced to a group of college students making an investigative documentary about a string of bear poaching incidents.  They soon stumble upon the unexpected, discovering that the story they were seeking masks a much more implausible truth.  Their pursuit of a suspected poacher, Hans (Otto Jespersen), is the key to a larger story than they imagined.  At the outset, he’s reluctant to speak to the students, but they’re determined to get a story.  Persistence pays off eventually, as they learn that the dead bears are only a ruse to conceal a government cover-up.  For his part, Hans is tired of continuing the charade, and decides that it’s time to let the world know that fairy tale creatures are real. 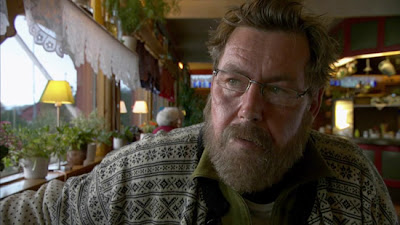 The students initially humor Hans and his eccentricities, but they come to appreciate the fact that there’s a method to his madness when hunting down the trolls.  It’s a hard pill to swallow that the stuff of folklore is real, but the young documentarians realize that there’s no other reasonable explanation for the events they’re witnessing.  The Norwegian wilderness depicted in TrollHunter looks suitably dense and mysterious, and it seems reasonable that they could have remained hidden from the general populace for centuries.
One of the most aggravating things about most found footage movies is that you rarely catch a glimpse of whatever it is that’s supposed to be the point of the footage (The Blair Witch Project, Cloverfield, etc…).  TrollHunter bucks the trend, and delivers admirably in this regard.  The trolls are first obscured by shadows and trees, but become more visible as the film progresses.  While perhaps not up to big-budget Hollywood standards, the computer-rendered trolls are convincing enough. 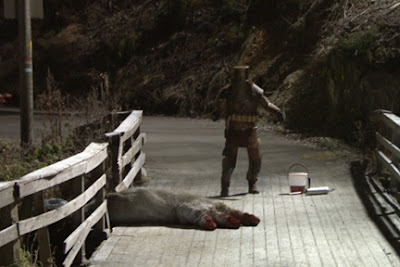 One of the most interesting things about the film is how much thought went into transforming mythical beings into believable flesh-and-blood creatures.  Øvredal blends ancient legends with modern science to create a credible life cycle for the trolls.  The script describes four distinct species: the Mountain Kings, the Tosserlads, the Ringlefinch and the Jötnar, along with numerous variants.  Hans provides a lot of extra details about the idiosyncrasies of trolls, which make him a more effective hunter.  In one scene, a veterinarian who’s in cahoots with Hans provides an explanation as to why sunlight is deadly to the trolls.
Jespersen’s performance as the laconic Hans is also worthy of note.  He’s tired of his job, and takes no joy in exterminating wayward trolls who stray from their government-designated territories.  In a scene late in the film, he briefly recalls an incident when he was forced to indiscriminately wipe out an entire group of trolls because they stood in the way of an important construction project.  Although it’s obviously a fictional scenario, the filmmakers are clearly commenting on the unfortunate consequences when nature gets in the way of human progress.
TrollHunter is not without its flaws.  I’m probably the last person to conduct a theological discussion, but I found it a little difficult to wrap my brain around one of the film’s conceits -- that the trolls can sense people who are Christian and believe in a god.  Following the film’s logic, is it the simple belief itself or the properties of being a Christian (a metaphysical connection) that the trolls can sense?  When a new camera- person is brought in (who happens to be Muslim), Hans is unsure what the effect will be. This seems to be a strange detour for the script, and it’s never fully explored.   It raises some interesting questions but never answers them.  Then again, I’m not an expert in Norwegian folklore, so I presume this might provide some much-needed insight.  Another question raised by the movie is why there haven’t been more witnesses over the years, considering the immense size of some of the trolls.  Also, at 103 minutes, it’s probably about 15 minutes too long, with the material seemingly stretched a little thin. 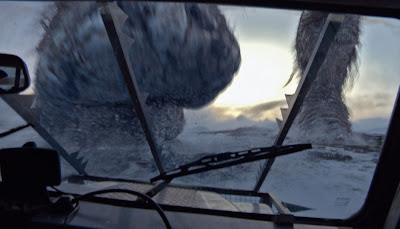 All nitpicks aside, TrollHunter is an inventive, unusual fantasy film that’s deserving of your time.  Even if you’re sick to death (And I know I am!) of the glut of recent found footage movies, you’ll find something new to appreciate here.  The filmmakers’ attention to detail truly sets this apart from the rest.  After you’ve seen the “evidence,” don’t be surprised if you start believing in trolls yourself.
Posted by Barry P. at 10:30 AM