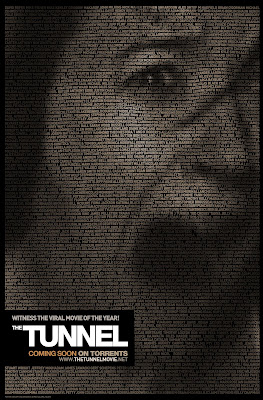 The Tunnel is a standout entry in the otherwise overcrowded pseudo-documentary/horror subgenre.  Although the film isn’t exceptionally original, the marketing strategy for The Tunnel certainly merits attention.  Instead of going through normal distribution channels, the Australia-based filmmakers decided to take the unusual step of releasing it online for free via BitTorrent.  Visitors to the official web site are encouraged to purchase their own piece of the film, frame by frame, or a DVD hard copy, helping the filmmakers to raise revenue.  It’s certainly a risky venture, but it’s a gamble that The Tunnel’s producers hope will pioneer how future releases are distributed and displayed to the movie-going public.  Okay, that’s all fine and dandy, but how’s the damn movie?  It’s surprisingly effective, overall.

Through an opening montage of vintage photos and some brief exposition, we learn about Sydney’s vast network of underground tunnels, which were largely constructed during the early part of the 20th century.  Some of these tunnels were utilized for the city’s subway system, while other portions were sequestered as World War II bomb shelters.  Miles of unused (and sometimes forgotten) tunnels remain, the result of construction that was abandoned for one reason or another.  As a solution to Sydney’s burgeoning water problems, the municipal planners look to an enormous subterranean reservoir located beneath the city, in an area that intersects with the unused tunnels.  One of the impediments to the project’s success is the large population of homeless people who reside in this uninviting environment.  The city planners fear the public relations nightmare that would likely ensue from their displacement, and the local government is reluctant to speak about the issue.  After learning about the unexplained disappearances of several homeless people in the tunnels, television reporter Natasha Warner is determined to investigate, and heighten the public’s awareness of a situation that’s developing literally beneath their feet. 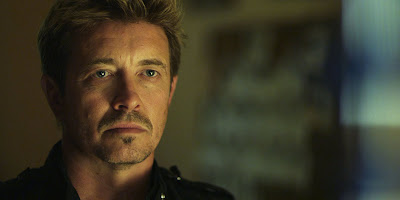 After her attempts to legally gain access to the tunnels are stonewalled by unsympathetic government officials, Natasha resorts to less kosher methods.  Natasha and her camera crew surreptitiously break into one of the numerous maintenance tunnels to enter Sydney’s underground labyrinth, and it soon becomes apparent that they’ve got more than they bargained for.  Finding their way in without anyone else’s knowledge means they’re free to explore on their own, but without the benefit of any outside help.

The Tunnel’s cast of unfamiliar faces works to the film’s advantage, with performances that seem credible, but not amateurish.  The acting generally appears spontaneous and natural.  Bel Deliá is good as the ambitious reporter Natasha Warner, whose single-minded desire to bring back a noteworthy story leaves her blind to the costs involved.  Her cameraman Steve Miller is played by Steve Davis, in his first acting role.  His real-life experience as a cameraman in the first Gulf War lends some veracity to his character, who’s seen it all and done it all.  Early in the film, he recounts one of his wartime exploits, and it’s clearly established that he doesn’t always let personal safety get in the way of a good time.  The rest of the reporting crew is rounded out by Andy Rodoreda as Peter Ferguson, and Luke Arnold as “Tangles.”  The men in the crew share a casual camaraderie that contrasts the thinly veiled animosity that they feel for Natasha.  Although the motivations for their cliquey behavior initially appears to be little more than old-school “boys club” sexism, it’s apparent that their skepticism about Natasha isn’t entirely misplaced.  As they continue their ill-advised foray into the tunnels, their personal safety begins to take a backseat to Natasha’s obsessive brand of journalism.

The Tunnel covers territory that’s a bit too familiar at times.  The pseudo-documentary format, replete with “shaky cam” footage has become something of a cliché in recent years, and I couldn’t lose the feeling that I had seen this before.  The juxtaposition of talking head interviews with “found footage” closely resembled another recent, arguably less effective Australian pseudo-documentary, Lake Mungo.  As with similar types of movies, you’re left to wonder why anyone would keep filming when things really started getting out of hand.  It’s too bad that The Tunnel ultimately whets our collective appetite with a premise, and fails to follow through completely.  The filmmakers work a little too hard to adhere to “just the facts” of the horrific events, without pausing to speculate about the origins of what lies in wait beneath Sydney.

Nitpicks aside, it’s easy to point out what The Tunnel gets right.  Director Carlo Ledesma knows how to kick up the creep factor, as Natasha and her reporting crew become hopelessly lost in the subterranean tunnels.  The horrors that they eventually encounter in the tunnels reminded me favorably of the definitive spelunking nightmare flick, The Descent.   There are some genuinely frightening scenes as they stumble around in the dark, looking for a way out.  As they venture further into the increasingly claustrophobic tunnels, it’s apparent that they’re completely out of their element, and their mistakes will lead to gruesome consequences. 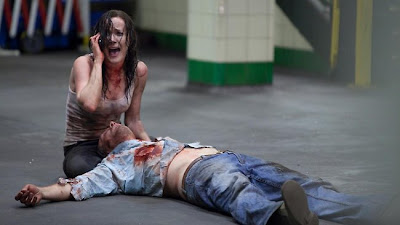 It’s tough to ignore The Tunnel’s untraditional means of reaching out to a global audience, which for good or ill will be inextricably linked to the movie itself.  Will it pay off?  It remains to be seen whether or not this model will pave the way for more films released in a similar manner in the future, or if this is simply a marketing dead end.  Regardless of the outcome, the filmmakers can rest assured that they have crafted a fine, if not particularly groundbreaking, addition to the horror genre.
Posted by Barry P. at 12:01 AM